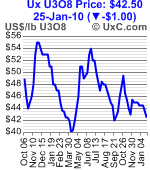 “to create more of these clean energy jobs, we need more production, more efficiency, more incentives. And that means building a new generation of safe, clean nuclear power plants in this country.“ – President Obama in his State of the Union Address

Update – Obama Set to Go Nuclear?   [William Tucker]
Hip, hip, hooray! President Obama is reportedly about to announce an expansion of the loan guarantee for nuclear plants from $18 billion to $54 billion — probably after hearing that applause, the biggest outburst of the night, when he mentioned nuclear in his State of the Union Address.

I know people are going to say, “Oh, he doesn’t mean it” or “It’s still a drop in the bucket,” but don’t be fooled. This is going to get the ball rolling. The thing to recognize is that nuclear already has so much momentum behind it, all it will take is a little push and it will be all downhill from there……read more HERE “The decarbonization of energy. With global concerns about carbon footprints, the move to nuclear energy is a foregone conclusion in much of the world. Why? Just look at the numbers:

China has taken the lead, with plans to build 10 new reactors a year for the next decade. India and Russia aren’t far behind. The U.S. has 17 applications to build 26 reactors waiting for approval. Energy consumption is expected to grow by 40% by 2030. And nuclear is the only source that can meet that demand.

That, briefly, is the case for a long-term bull market in uranium. It’s a simple case of supply and demand. Current uranium production doesn’t meet current demand. And demand will do nothing but increase as more reactors come online.” – Bob Irish Investors Daily Edge

“When I was head of an electric utility, I pushed for a greater position in nuclear, only to be shouted down by the environmentalists who carried the guilt of Hiroshima and took advantage of the two nuclear ‘events’ you mentioned.

Sadly, we are now behind other nations in utilizing this technology. It is not perfect, but is certainly the best of all currently available electric energy sources”.- Paul Cunningham

“We still have to address spent fuel storage and conversion, and get over the NIMBY behavior that has not allowed that to happen in the past. Meanwhile, uranium mining seems a good investment.” Bob Irish Investors Daily Edge