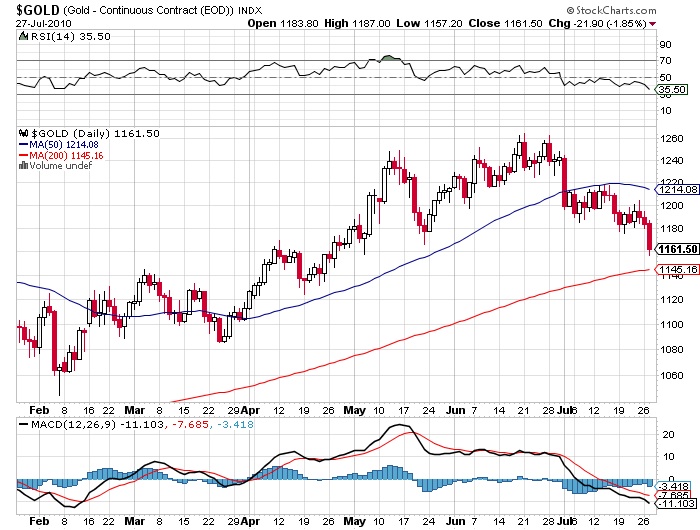 U.S. Stock Market – Throughout 2009 and at least twice this year, I received many inquiries on why I didn’t short the stock market and now I missed a big decline (the last two centered around the DJIA breaking below 10,000). My answer then and still now is I don’t see a sharp fall but rather a no where’s fast style trading pattern for the foreseeable future. I would consider some bearish call spreads if the DJIA somehow got near 11,000 before the November elections.

I’ve noted on several occasions there’s an either an always long or short mentality among many retail and even some professional traders. Not being either seems to be as tough for many as it is for a horse racing fan not to bet every race. You got to be in it to win it may be a good lottery ticket marketing ploy but isn’t to me for both gambling facilities; the racetrack and the stock market. Gold – As noted earlier today, in recent days I suggested keeping any buying power dry until either a test around $1,140 or a break above $1,225. The many stops I spoke about between $1,180 and $1,185 were hit today. The fact that today was the typical monthly rape and pilferage known as option expiration didn’t help either.

Ideally, I would welcome a further sell-off straight down to the 200-day M.A. around $1,145 as it would be the washout one many times sees at intermediate bottoms. Even more desirable (although I doubt most reading this could stomach it) would be a break below the 200-day and then a reversal back above it. Unfortunately, the gloating by the gold perma bears and the media cries of the end of the gold bull market would likely be too much for some to handle.

We’ve another month or so of seasonally weakness in front of us. Please note this is also the “roll” week on the Comex. Anyone not intending or funded to take delivery of August Gold has to be out of their long positions by the end of the day Thursday.

The last great buying opportunity is near. If you’re very long-oriented (these days that’s someone who’s willing to look out past a day week or even a month), you can begin buying here. If you’re more of a timer and willing to miss a major move up in exchange for buying near or at the actual bottom, hold off for a test of the 200-Day M.A. Me? I’m just enjoying the thought that as I type this, Tokyo Rose is likely standing in front of his dimly lit mirror saying “This time is different, I will be right now.” Oh how I would love to be there later this year when he realizes his record remains intact – world’s worse (and please don’t send those emails saying that’s unchristian. I’m a sinner just like everybody else)!

U.S. Bonds – Debt, Debt and more debt. The mother of all bubbles is bonds. When will it burst? I’m no longer trying to time it. But when it comes, it could be the ugliest bust yet.

U.S. Dollar – The bear market rally is over but a sideways move for several weeks between key support around 80 and 85 to the upside is likely.

Oil and Natural Gas – No significant bullish or bearish reasons to get long or short. Model Portfolio stock Dennison Mines has turned bullish technically and is an aggressive speculative buy on any pullback under $1.50. Watch this very interesting commentary on the company.