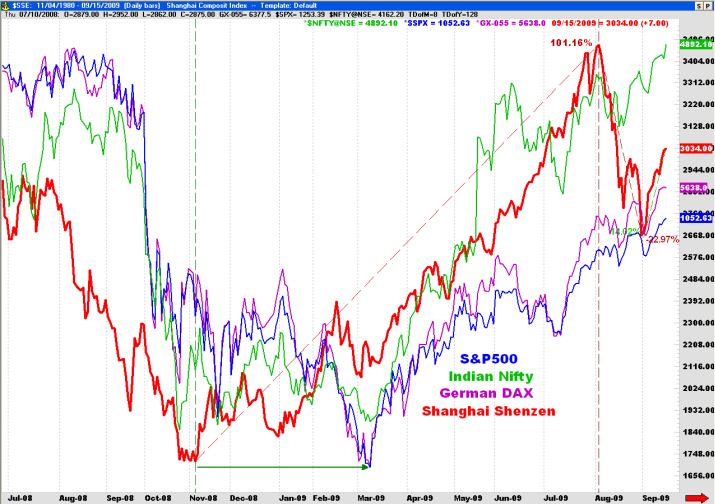 Technical action by S&P 500 stocks remains bullish. Forty S&P 500 stocks broke resistance and one stock broke support (Qwest). The Up/Down ratio rose from 11.83 to (423/32=) 13.22, an all time high. Notable on the list of stocks breaking resistance were chemical, utility, and financial service stocks.

The latest gold ETF was launched last week. Symbol is SGOL. Gold underlying the ETF is held in Zurich Switzerland.

* Markets on the move – Is this a ‘made in China’ recovery?
* Carry on currencies – Does the carry trade still moves stocks?
* Market Mythbusters – Do high price stocks really perform best?

Markets on the move…

Is this a ‘made in China’ recovery?

Since the turn of the millennium, China has been a rapidly growing economic powerhouse that has increasingly impacted markets around the world. In October 2007, stock markets were soaring and the S&P500 Index (SPX) hit a new all-time high of 1565 on October 9. Exactly one week later on Tuesday October 16, the Chinese Shanghai Composite (SSE) hit its all-time high of 6124.

Although the SPX high was never bested, the index stayed above 5000 until January 2008 but then rallied back above this psychological level again into May before falling off a cliff in September.

However, once the Chinese SSE had peaked, it wasted no time in heading for the basement.  A year later it had lost a whopping 72% compared to a loss of 41% for the SPX over the same period.