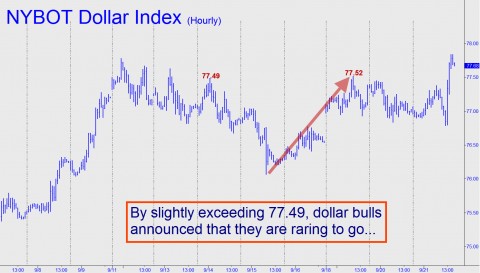 The dollar looks primed to move significantly higher, implying that U.S. stocks and precious metals will remain under pressure for the foreseeable future.

That doesn’t necessarily mean Gold and Silver cannot continue to rise against all currencies nonetheless, since the global monetary blowout that has caused them to ascend for more than a decade shows no sign of abating. However, whatever strength bullion musters in the weeks and months ahead will in dollar terms be tempered at least somewhat by a resurgent buck. We recently called subscribers’ attention to a possible nascent bull market in the dollar via a trading “tout” that recommended setting a chart alert at 78.87, about 0.6 percent above where the NYBOT Dollar Index was trading at the time. Yesterday, the  Index spiked to within 3 cents of that benchmark, so officially the baby bull has not yet been born.  However, during an online tutorial session that we conduct every Wednesday morning, we had a powerful sense of déjà vu yesterday while looking at an hourly chart of the Dollar Index.

The chart is reproduced above. The crucial piece of it, based on our proprietary Hidden Pivot Method, is the 77.52 peak achieved during Monday morning’s spike-up opening. Notice how that peak slightly exceeded an earlier one at 77.49, creating on the hourly chart what Hidden Pivot-eers  call a bullish “impulse leg.” The implication is that any pullback such as the one that occurred yesterday represents a buying opportunity.  As for our feeling of deja vu, the price pattern on the dollar’s hourly chart is strikingly similar to one from which the Dow Industrial Average emerged, in 2006, following what had looked like  massive, six-year topping pattern. As bearish as we were on the economy at the time, the long-term bullish implications of the breakout could not be ignored.  Now, the same holds true for the dollar even though the relevant pattern is occurring on a chart of much lower degree. What this says – very clearly – is that the Dollar Index is about to leap to at least 79.86 — about 2.7% above current levels. If so, it could be just the beginning of a much larger move, since a print at or near 79.86 would create a fresh “impulse leg” on charts of even higher degree).

The next Hidden Pivot Seminar will be held on October 5th – 6th.  Signup today!
Want to be alerted in real time to these changes? Click here for a free trial subscription to Rick’s Picks, including access to a chat room that goes ‘round-the-clock, and to trading recommendations and analysis that are continually updated during market hours.
adroll_adv_id = "RU3VTGU3DFFZ7MWZPXEGLG"; adroll_pix_id = "AI4QK2J7ANGPPPFRURQABH"; adroll_version = "2.0"; adroll_current_page = "other"; adroll_currency = "CAD"; adroll_language = "en_US";