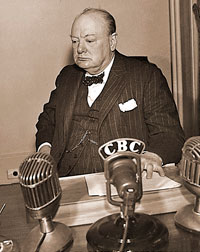 A Time for Honesty, Sacrifice, and a Serious Financial Course Change

I just got back from my first lengthy vacation in years — to New York, London, and Paris. I enjoyed many fine meals and fun nights out with friends. I got to see everything from the Rosetta Stone and St. Paul’s Cathedral to the Mona Lisa and the Eiffel Tower.

The only real downside? The lousy January weather!

But perhaps the biggest highlight of the trip, at least for a history buff like me, was the Churchill Museum and Cabinet War Rooms just off St. James Park in Westminster. Tucked away in the basement of the U.K. Treasury, the facility allows you to experience what it was like during the Nazi “Blitz” of World War II. Churchill didn’t pull any punches when he gave his regular radio speeches.

Beginning in the mid-1940s and continuing for months on end, successive waves of Nazi fighters and bombers began pummeling the British coastline. They struck the British airfields next before moving on to British towns and cities, including London.

You can eyeball the cramped, low-ceilinged meeting rooms where Churchill and staff pondered the course of the war amid thick, acrid clouds of cigar and cigarette smoke.

You get to see the Spartan sleeping quarters they made do with, and the musty old maps of Europe, the U.K., and the North Atlantic they used to track troop movements and convoys.
You can listen to the speeches Churchill delivered even as the bombs fell — never lying to the British public about the dire straits they were in … but also never failing to inspire.

Perhaps most disturbing of all, you can view the yellowed casualty lists they used to track the dead and wounded from the Nazi bombardment. More than 20,000 ultimately perished in London alone.

Not much has changed in the nearly 64 years since the facility was mothballed. But I still couldn’t help but be inspired from my visit. After all, Londoners persevered during the Blitz. Churchill didn’t back down. The Brits “kept calm and carried on.” And ultimately, the Allies won the great war.

Why do I bring this all up? Because I feel like we’ve lost that ability for politicians to level with us, especially when it comes to financial matters. There’s no Churchill on the airwaves willing to tell it like it is, and asking for personal sacrifice.

Instead, politicians keep promising the sun, the moon, and the stars — even though we simply can’t afford it. We’re SPENDING like there’s a massive world war going on even though there isn’t! And no one seems to want to change this course we’re on.

You can already see “budget bombs” scoring direct hits in Athens. And they’re landing on the outskirts of Lisbon. If we don’t do something about it soon, one of ‘em is going to land squarely in Washington — with bond prices plunging and interest rates soaring!

Just a few short days ago, the Congressional Budget Office (CBO) became the first official D.C. source to open its bomb bay doors and let loose on all of us. The CBO’s projections: Instead of falling substantially from $1.4 trillion in 2009 (9.9 percent of GDP), the 2010 deficit would essentially hold steady at $1.35 trillion (9.2 percent of GDP).

As stunning as those figures are, long-term projections usually UNDERESTIMATE the deficit. Roughly 80 percent of the four-year deficit forecasts issued in the past three decades ultimately proved too optimistic, according to The New York Times.

Those forecasts rely on growth, revenue, and spending projections that don’t pass the test of time. Politicians just can’t help themselves — pandering, over-borrowing, and overspending is in their nature.

Just consider this: Two years ago, the CBO forecast the 2010 deficit would be $241 billion. Now the CBO is throwing that projection out the window and saying it’ll be more than FIVE AND A HALF TIMES AS BIG!

But if you thought the CBO numbers were bad, you should read through the Obama administration’s latest budget. It forecasts a whopping $1.6 trillion deficit this year — more than $200 billion above and beyond the CBO’s numbers. That would come to 10.6 percent of GDP, the worst in modern time.

Another $1.3 trillion. And the years after that? More of the same. The White House Office of Management and Budget (OMB) is now expecting $8.5 trillion in red ink over the next decade, with the annual deficit NEVER falling below the 3 percent-of-GDP threshold considered fiscally responsible.

Those projections assume relatively rosy growth — 3.8 percent next year, and more than 4 percent over the following three years. We’ve only seen a string of 4 percent+ growth readings twice in the past three decades.

The projections also include assumptions about taxes and spending discipline that won’t pass the test of time. One example: The OMB projects $250 billion in savings from a proposed three-year freeze on a significant chunk of domestic spending. Increases thereafter would be limited to the inflation rate.

I don’t know about you, but I think the chance of that happening is somewhere between slim and none! Neither the Democrats nor the Republicans have shown any real spending discipline. There’s no reason to assume they’ll have a “Eureka!” moment in the middle of the decade.

And I’m not even getting into the Social Security- and Medicare-related problems. We’ve promised trillions in benefits over the coming years that also threaten to blow our nation’s balance sheet to smithereens.

Debt, Debt, Debt.
And Did I Mention Debt?

Bottom line: A never-ending wave of budget bombs is headed our way in the coming years. That will drive the total U.S. public debt load inexorably higher — from about $9.3 trillion in 2010 to $18.6 trillion by 2020. And the cost of servicing all that debt? It’s projected to more than QUADRUPLE from $188 billion to $840 billion!

I’m at a loss for words, folks. These figures are horrendous … outrageous … infuriating … and terrifying all in one. They paint a picture of a country that’s on a collision course with financial catastrophe.

We CAN still turn things around. We can pull our nation out of this fiscal tail spin. Heck, if the average Londoner could pick himself out of the rubble of his home, brush himself off, and head to work in the middle of the Blitz, then we can show the same stoic resolve here.

But that will take real political courage and real sacrifices. There is no easy way out.

Mike Larson joined the company in 2001, and has more than 10 years of experience researching and writing about personal finance, investing, and the housing and mortgage industry. In March of 2006, Mr. Larson was named associate editor of the company’s monthly Safe Money. In this role, he is responsible for writing and editing as well as analyzing trading opportunities for clients. Mr. Larson is also a regular contributor to the company’s daily e-letter, Money and Markets and editor of three of its premium trading services.

Recognized as an interest rate and mortgage market expert, Mr. Larson’s views have been quoted in numerous publications nationwide, including the Washington Post, Chicago Tribune, Dow Jones Newswires, Associated Press, Reuters, CNNMoney.com, Sun-Sentinel, Tampa Tribune and the Palm Beach Post.  His in-depth analysis of the housing and mortgage market and accurate forecast of the subprime crisis has lead to frequent appearances on CNBC, CNN, Fox Business News, and Bloomberg Television, as well as many nationally syndicated radio shows.  Mr. Larson’s understanding of the U.S. real estate market has also been recognized overseas, having recently been featured in a documentary on the subject produced by a Barcelona-based television station.  In addition, his writing has been acknowledged by both the National Association of Real Estate Editors and the Massachusetts Press Association.

Among the first analysts to call the housing slide, Mr. Larson’s policy paper, “How Federal Regulators, Lenders and Wall Street Created America’s Housing Crisis: Nine Proposals for a Long-Term Recovery,” received broad media coverage following its July 2007 submission to the Federal Reserve and FDIC.  In the paper, Mr. Larson accurately predicted the long-term impact of the deepening subprime mortgage crisis on the broader economy that the nation faces today.