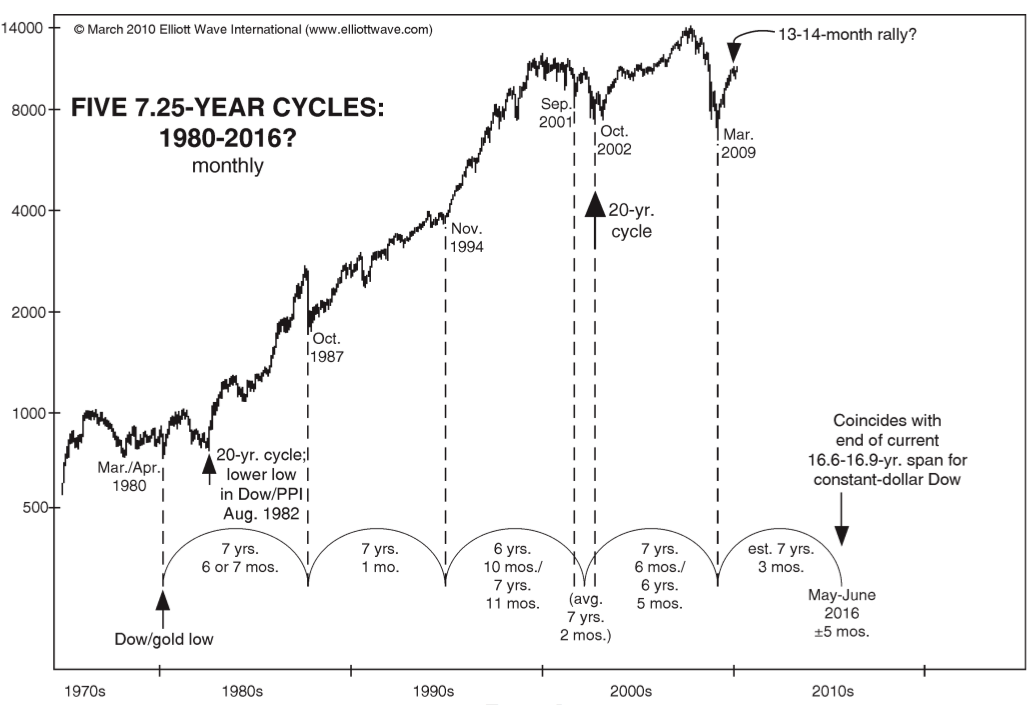 The March 2004 issue of The Elliott Wave Theorist postulated a 7-year crisis cycle going back to 1973 and used it to predict another crisis in 2008. Here are the table and the forecast from that issue:

There was certainly a crisis and plenty of social fear in 2008, so this cycle performed as it should have. This rhythm prompted me to wonder if there might be a 7-year cycle in the stock market that would explain the regular appearance of these crises.

THE OUTLOOK FROM TIME CYCLES

Cycles can be quite useful for a time.

For some time, I had tracked a 3.3-year cycle, which was distinct from 1978 to 1997 and then disappeared. The venerable 4-year cycle was distinct from 1962 to 2002. There was a minor pullback into late 2006, and if the 4-year cycle were still operating, its next low would be due in late 2010. This is one reason why I expected a sharp rally off the 2009 low and then a crash. This rally has been sharp, but it has gone on too long to ﬁt into a four-year cycle proﬁle, so we have to treat the 4-year cycle as also gone. This outcome prompted me to go back to the charts to see if there have been any consistently reliable cycles since the beginning of Cycle wave V to now. I think I have found something very interesting. The average length of this cycle is very close to 7 years, 3 months. The next major bear market bottom is thereby due 7 years 3 months after the March 2009 low, i.e. in June 2016.

Ed Note: This commentary on cycles came from a 10 page Forecast titled published in April 2010 in which explains in detail Robert Prechter’s Market Forecast.