Three Great Questions…… to answer for a profitable 2010 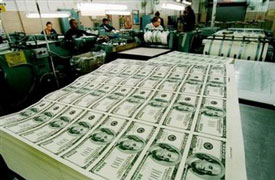 We’re in a new, volatile year. But it will also be a year chock full of new opportunities and profit potential. I’ll show you one of my favorite sectors in a few minutes.

But first, let me help you keep the long-term picture in focus by asking — and answering — some questions for you …

Question #1: Will 3 billion souls in Asia who have just entered the 20th century, let alone the 21st, suddenly stop demanding new, better lifestyles for themselves? For their children?

I don’t think so.

Indeed, China just announced that its gross domestic product for 2008 topped $4.6 trillion, 4.5% higher than expected. And for 2009, China’s economy likely grew more than 9%, putting its GDP at more than $5 trillion, and making China the second-largest economy in the world, displacing Japan.

Moreover, it’s not just manufacturing in China that continues to grow. Over the last two years, by far, it’s been the services sector that has seen the biggest growth, increasing at a 9% clip. The service sector in China now accounts for nearly 42% of total GDP, up from 40.1% in 2008.

That proves, unequivocally, that not only is China growing like crazy, but also that its economy is not just about manufacturing. It’s also about consumption, services, agriculture, and more.

Moreover, there are no signs that China’s economy is going to falter in 2010. Beijing will largely maintain its easy-money policies … pump even more money into its economy … and, importantly, keep its currency pegged to the dollar.

All of this not only means China will continue to boom in 2010, but also that China’s economy could easily overtake the U.S. economy within 10 years.

Bottom line: 3 billion citizens in Asia are still on the move, emerging from decades-old policies that kept them largely in the dark ages. And all this is happening as the West, the United States and Europe, get mired down in debt piled upon other unpayable debts … in overregulation … in newly designed and heavily bureaucratic policies … in the threat of rapidly rising taxes, and more.

In short, I see no end at all to the demise of the West, and the rise of the East.

Question #2: Will the severe supply restrictions in many of the world’s natural resources suddenly disappear in 2010, creating an oversupply instead?

I don’t think so.

If anything, with less capital and credit available today, the supply constraints in many natural resources are bound to get worse, not better.

Not just because Mother Earth has limited supplies of these commodities. But also because the financial crisis has forced many natural resource companies to put new exploration projects on hold. Mines, too, have been shuttered over the last two years.

And keep in mind, it’s a lot easier to shut down a mine or an oil well than it is to crank them up again.

All of this is occurring while 3 billion Asians are not only still consuming more natural resources, but also set to see their consumption grow, year-after-year.

How can the world not face severe resource shortages in the years ahead?

I think the notion that the Federal Reserve can exit its recent policies of almost zero-cost money and printing money stands a snowball’s chance in hell of ever happening.

As I showed you a couple weeks ago …

Our debts to foreign countries, chiefly Japan and China, have exploded to 3.5 TRILLION dollars, a 25% increase.

All told, Washington is now in debt to the tune of nearly $134 TRILLION, an amount equal to $435,702 FOR EVERY MAN WOMAN AND CHILD in the United States.

Patently unpayable? In current dollars, you bet it is! The Federal Reserve will keep interest rates low, keep printing money and keep devaluing the dollar to pay off its massive debts.

But therein is the key to understanding this whole financial mess. Washington does not have to pay off debts with current dollars. It can devalue the dollar and pay off the debts. So instead of defaulting, it pays off the debts with new cheaper money.

It effectively robs Peter, in this case, you, me, and the country’s creditors, to pay Paul.

Which is why there is simply no way the Federal Reserve will do anything but keep interest rates low … keep printing money … and keep devaluing the dollar.

Sure, there will be the inevitable dollar rallies, like the one we’re having now, caused by mistaken views that parts of the world are in worse shape than the United States.

But that’s also what the Romans thought when the denarius caught an occasional rally — even while Rome was burning.

My view: Given the above three forces …

1. The continued rise of Asia, especially China and India, and all the demand it’s creating for better lifestyles for fully half the world’s population.

2. The inevitable supply constraints of natural resources imposed by Mother Nature. And …

3. The infinite printing of money by the Federal Reserve and the resulting depreciation of the world’s reserve currency, the dollar, the medium currently used to buy and sell most of the world’s natural resources …

Means one, and only one, thing …

Natural resources will be the sector to be in again for potentially big profits in 2010.

Watch for my signals in Real Wealth Report. If you’re not already a member, join now. The $99 membership is peanuts compared to the huge profits available in 2010.

With nearly three decades of experience in precious metals and natural resource markets, Larry Edelson has played a pivotal role in training Weiss Research staff and in guiding Weiss Research’s customers to prudent investments in these sectors.

His Resource Windfall Trader and Real Wealth Report provide a continuing education on natural resource investments, with recommendations aiming for both profit and risk management. His team of technical analysts helps enhance the timing of investment recommendations with the aim of continually improving performance results for investors.

He holds a B.A. degree from Columbia University. Mr. Edelson got his start on Wall Street in 1978. By 1980, he had his own firm active in international brokerage, financial analysis and money management.

In the mid-1980s, Mr. Edelson was one of the largest gold traders in the world, responsible for as much as $1.4 billion in daily gold trading volume on the Comex in New York, in today’s dollars. Mr. Edelson also managed several multi-million-dollar natural resource and commodity-based private investment funds.