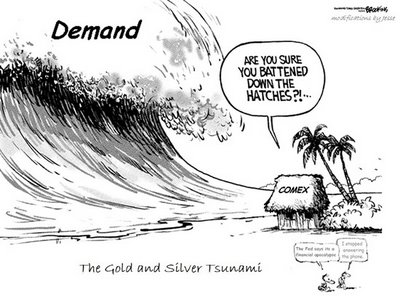 Of all the “claims” I’ve heard from the gold bears/weak-knees bull camp, without a doubt this one today takes the cake:

“…Gold is NOT in a bull market. The dollar is in a bear market…”

Hello? Ah, a declining U.S. Dollar “Is” bullish for gold. It truly amazes me to see how long someone can be wrong and continue to find “innovative” ways of twisting in the wind.
Speaking of the dollar

How to know when gold is at a top? This is hysterically funny!

There’s a correction/consolidation out there so when it comes, rest assured the gold bears/weak knee bulls will say for the umpteen time, gold has topped. At this point, it should be only a pause that refreshes.

I believe it’s fool-hearty to think a diplomatic solution will be reached over Iran.

I’ve written about the political price the U.S. is going to pay for it’s outrageous debt and spending habits.