There is never just one…. 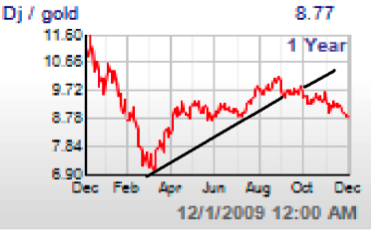 STOCKS VS. GOLD:  A rather interesting  chart, courtesy of  24gold.com suggesting
that one might well  consider “swapping”  stocks for gold even at  these levels. THERE IS NEVER JUST ONE COCKROACH:  This is one of our favourite rules of trading, and indeed in this year’s list of Rules, which we sent out last week, it was #13. In life, the sight of one cockroach in a restaurant is an assurance that others are nearby, and in the world of trading, the first bad news is almost always… ALWAYS… followed by more such.  We came upon this rule years ago in the aftermath of the Enron Affair when the rather newly appointed President of the company at the time, Mr. Jeff Skilling, announced his retirement  so swiftly after his promotion, ostensibly to spend more time with his family.  We knew… and indeed everyone knew… that that was just a false front and that bad news was to follow.  More did… and more did… and even more did.

It is in this light that we note comments from our old friend, Mr. Marc Faber of the Gloom, Doom and Boom report regarding the situation in Dubai.  He… like we… is convinced that the problems of Dubai World are but the “tip of the iceberg,” or in our parlance, the first cockroach. Marc said yesterday in an interview with Bloomberg news that

In the context of all the default[s] that will  happen in the world, [Dubai] is not a big thing,  But it’s a reminder that governments can  default.

That is precisely what Dubai World has done. It has raised the concern that governments can and do default, and that government guarantees are all too often “writ small, not large.” Dubai World may prove a mote in the eye of the global economy when all is said and done, but it may also have been the first or second cockroach. We must always be on the watch for others that might follow as the global recession… which we are certain has ended… is still having repercussions on the periphery that may spread to the centre stage sooner rather than later.