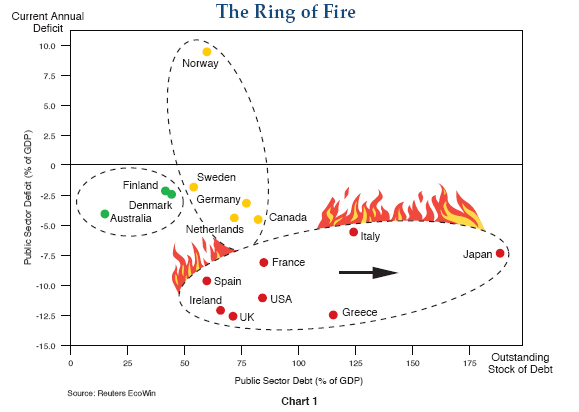 “What then is an investor to do? – given enough liquidity and current yields I would prefer to invest money in Canada – Bill Gross

Investment management is a privileged profession – not just for being paid by X-times what you’re really worth to society, but from the standpoint of longevity. If you’re good, and you at least give the impression that you still have most of your faculties, you can literally hang around forever. James Carville, the well-meaning but evil-lookin’ guy from the Clinton Administration once remarked that in his next life he’d like to come back as a bond manager. He had part of it right – the influence, the wealth, and even fame – but there was no need to imagine himself as some cryogenically preserved Wall Street version of Ted Williams – he was young enough at the time to make the leap and still have a 20-year career ahead of him. Other professions do not afford such opportunities – the gold watch at 65 is not only symbolic, but a statement in most professions that says you are more or less washed up. Athletes have at most 20 years and musicians seem to have that brief window of creation as well. The Beatles, for instance, were done after a decade’s time. Paul is still writing songs, but the magic clearly disappeared in the 70s and now his concerts are “garden parties” of remembrances as opposed to creation.

What I think is close to unique about investment management is that it’s really about the stewardship of capital markets, and that time weeds out the impostors, leaving the aging survivors to appear as wise and capable of guiding clients through the next crisis – whatever and whenever it might appear. That assumption has some logic behind it, but critically depends on the investor truly enjoying the game and – of course – holding on to at least a few billion brain cells that keeps him from being obviously senile or at least being accused of having “lost it.” An investment manager at 65 fears both. I remember having met John Templeton on the set of Wall Street Week nearly 20 years ago. I was a young buck and he was – well – on the downside of his career. About the only thing he could tell Rukeyser, it seemed to me, was to cite the rule of 72 and proclaim that stocks and the Dow would be at 100,000 by 2030 or something like that. Now, approaching that same age, I’m a little more understanding and a little less young-buckish. If that was his only lesson, then it was a pretty good one I suppose – Dow 5,000 and the New Normal notwithstanding. And despite the strikingly premature departure of Peter Lynch and the transition of George Soros to philanthropic pursuits, there are some great examples of longevity in this business. Warren Buffett, of course, comes immediately to mind, as does Dan Fuss of Loomis Sayles, who may wind up as the Bear Bryant or Adolph Rupp of the bond business. Peter Bernstein, who passed away but a few months ago, was a brilliant writer and commentator on the investment scene well into his 80s. So there’s hope for you still, James Carville, and, I suppose, for me as well. It’s quite a privilege to be a “steward of the capital markets,” to have done it well for so long and to still be able to walk up to the plate and face a 95-mile-an-hour fastball. Or, is it a curve? Time will tell.

There have been numerous changeups and curveballs in the financial markets over the past 15 months or so. Liquidation, reliquification, and the substituting of the government wallet for the invisible hand of the private sector describe the events from 30,000 feet. Now that a semblance of stability has been imparted to the economy and its markets, the attempted detoxification and deleveraging of the private sector is underway. Having survived due to a steady two-trillion-dollar-plus dose of government “Red Bull,” Adderall, or simply strong black coffee, the global private sector is now expected by some to detox and resume a normal cyclical schedule where animal spirits and the willingness to take risk move front and center. But there is a problem. While corporations may be heading in that direction due to steep yield curves and government check writing that have partially repaired their balance sheets, their consumer customers remain fully levered and undercapitalized with little hope of escaping rehab as long as unemployment and underemployment remain at 10-20% levels worldwide. “Build it and they will come” is an old saw more applicable to Kevin Costner’s Field of Dreams than to today’s economy. “Say’s Law” proclaiming that supply creates its own demand is hardly applicable to a modern day credit-oriented society where credit cards are maxed out, 25% of homeowners are underwater, and job and income creation are nearly invisible.

In this New Normal environment it is instructive to observe that the operative word is “new” and that the use of historical models and econometric forecasting based on the experience of the past several decades may not only be useless, but counterproductive. When leveraging and deregulating not only slow down, but move into reverse gear encompassing deleveraging and reregulating, then it pays to look at historical examples where those conditions have prevailed. Two excellent studies provide assistance in that regard – the first, a study of eight centuries of financial crisis by Carmen Reinhart and Kenneth Rogoff titled This Time is Different, and the second, a study by the McKinsey Global Institute speaking to “Debt and deleveraging: The global credit bubble and its economic consequences.”

The Reinhart/Rogoff book speaks primarily to public debt that balloons in response to financial crises. It is a voluminous, somewhat academic production but it has numerous critical conclusions gleaned from an analysis of centuries of creditor/sovereign debt cycles. It states:

Their conclusions are eerily parallel to events of the past 12 months and suggest that PIMCO’s New Normal may as well be described as the “time-tested historical reliable.” These examples tend to confirm that banking crises are followed by a deleveraging of the private sector accompanied by a substitution and escalation of government debt, which in turn slows economic growth and (PIMCO’s thesis) lowers returns on investment and financial assets. The most vulnerable countries in 2010 are shown in PIMCO’s chart “The Ring of Fire.” These red zone countries are ones with the potential for public debt to exceed 90% of GDP within a few years’ time, which would slow GDP by 1% or more. The yellow and green areas are considered to be the most conservative and potentially most solvent, with the potential for higher growth.

A different study by the McKinsey Group analyzes current leverage in the total economy (household, corporate and government debt) and looks to history, finding 32 examples of sustained deleveraging in the aftermath of a financial crisis. It concludes:

Initial conditions are important because the ability of a country to respond to a financial crisis is related to the size of its existing debt burden and because it points to future financing potential. Is it any wonder that in this New Normal, China, India, Brazil and other developing economies have fared far better than G-7 stalwarts? PIMCO’s New Normal distinguishes between emerging and developed economic growth, forecasting a much better future for the former as opposed to the latter. Chart 3 displays a startling recent historical and IMF future forecast for government debt levels of developed and developing countries. “Escalating” might be a conservative future description for advanced countries. “Stable” might now be more applicable to many emerging sovereigns. What then is an investor to do? If, instead of econometric models founded on the past 30–40 years, an analysis must depend on centuries-old examples of deleveraging economies in the aftermath of a financial crisis, how does one select and then time an investment theme that can be expected to generate outperformance, or what professionals label “alpha?” Carefully and cautiously with regard to timing, I suppose, but rather aggressively in the selection process under the assumption that it’s never “different this time” and that history repeats as well as rhymes. Reinhart and Rogoff’s book, if anything, points to the inescapable conclusion that human nature is the one defining constant in history and that the cycles of greed, fear and their economic consequences paint an indelible landscape for investors to observe. If so, then investors should focus on the following 30,000-foot observations in the selection of global assets:

Of all of the developed countries, three broad fixed-income observations stand out: 1) given enough liquidity and current yields I would prefer to invest money in Canada. Its conservative banks never did participate in the housing crisis and it moved toward and stayed closer to fiscal balance than any other country, 2) Germany is the safest, most liquid sovereign alternative, although its leadership and the EU’s potential stance toward bailouts of Greece and Ireland must be watched. Think AIG and GMAC and you have a similar comparative predicament, and 3) the U.K. is a must to avoid. Its Gilts are resting on a bed of nitroglycerine. High debt with the potential to devalue its currency present high risks for bond investors. In addition, its interest rates are already artificially influenced by accounting standards that at one point last year produced long-term real interest rates of 1/2 % and lower.

The last decade – the “aughts” – were remarkable in a number of areas: jobless recoveries in major economies, negative equity returns in U.S. and other developed markets, and of course the financial crisis and its aftermath. If an investment manager and an investment management firm proved to be good stewards of capital markets during the turbulent but vapid “aughts,” they may be granted a license to navigate the rapids of the “teens,” a decade likely to be fed by the melting snows of debt deleveraging, offering life for unlevered emerging and developed economies, but risk and uncertainty for those overfed on a diet of financed-based consumption. Beware the ring of fire!