The REAL State of the Union in just 889 words… 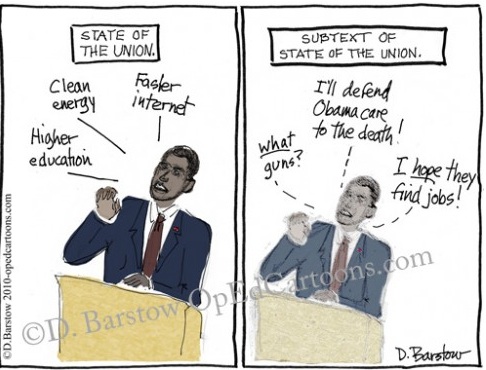 This summer we will commemorate the 100th anniversary of the start of World War I.

This senseless, destructive war was started and championed by politicians who cared nothing for the 9 million people who lost their lives.

And in doing so, they began a century of warfare which continues to this day.

Our military industrial complex is larger than ever. We have nearly 2 million troops and national guardsmen, plus 3.5 million civilians employed in the defense sector.

With such awesome capabilities, we continue to resort to violence and death to exact political goals which benefit a tiny elite.

All of this has created a police state in the Land of the Free that is a far cry from the country we all grew up in.

Your government has spawned a culture of fear and intimidation. Nearly every federal agency, including the Fish and Wildlife Service, has its own gun-toting police force to pistol-whip citizens into submission.

And we’re stocking up. Your government has recently procured 1.6 BILLION rounds of hollow-point ammunition to supplement our existing supplies.

But frankly, we don’t need guns to harass citizens.

Our tax authorities have become more threatening than mafia warlords. The plunder is so severe that record numbers of Americans are renouncing their citizenship and leaving the country.

There are now dozens of federal, state, and local agencies and courts which have the power to confiscate your assets without any due process.

In addition to your house, your business, and your savings, we also have the authority to take your children away from you as if they are property of the state.

We are here to tell you what you can and cannot put in your own body, or whether you can collect rainwater that falls on own property.

In fact, on any given business day, the federal government issues hundreds of pages of new ‘rules’, proposed regulations, draft bills, executive orders, and/or regulatory notices.

And if you are not compliant with these rules, you may be committing a crime. Whether you know it or not.

When this nation was founded, there were four federal crimes on the books. Today there are THOUSANDS. Plus we have millions of government employees at all levels to enforce the penalties.

All of this, of course, is financed by you the tax slave.

You (plus unborn generations) are the poor suckers charged with paying off the national debt we politicians have created.

Officially the debt is just north of $17 trillion. But if you include Social Security and pension shortfalls, the figure is several times higher.

You’ll never know for sure because we have become masters of deceit regarding official statistics, whether inflation, unemployment, or our liabilities.

But the situation is so dire that the Congressional Budget Office projects the Social Security Administration’s disability insurance trust fund to RUN OUT by 2017.

We get by year after year by increasing the debt. And at well over 100% of GDP, we have truly reached the point of no return.

We may end up stealing your savings. Robbing your Social Security. Taxing you to death. Or simply inflating away the value of our debt.

Naturally, we’re going to screw you in the process somehow… so be prepared for that. Especially the inflationary tidal wave that’s coming.

Our central bank has expanded its balance sheet at an unprecedented pace, creating massive asset bubbles in its wake. These asset bubbles have disproportionately benefited the ultra-wealthy at the expense of everyone else.

Such wanton money printing has also been tremendously destructive to our credibility. Other nations worry about our reckless irresponsibility. That’s why we keep spying on them.

Make no mistake: the consequences of our actions are here. And the days of the United States as the world’s dominant superpower are finished.

As the decline hastens, we will struggle to sell our debt to the world and to ship our dollars abroad. Fewer nations will be interested in our empty promises.

And without the generosity of other nations loaning us money at record low interest rates that fail to keep pace with inflation, you will really be screwed.

When this happens, you can absolutely count on us to clamp down even harder on the economy and control even more of your lives. For your own good, of course.

No, this may not be the country that you all grew up in. But it is the state of our union… whatever remains of it.

And so my fellow Americans, I urge you to grab your ankles and get ready for a little ‘shared sacrifice’.

But don’t worry about me, or my senior staff. We will leave government with cushy pensions, $750,000 speaking fees, board seats on public companies, and top positions in the industries that we have accommodated at your expense.

And of course I will be paid handsomely for the arrogant memoirs I will write in which I deny any responsibility for the shit I’ve gotten you all into.

So when I say “shared sacrifice”, I really mean “your sacrifice”.

Thank you. God bless you, and God bless these United States of America.

Michaels Comment: The lack of sincerity is breathtaking. Want to know if someone is sincere? Watch them ignore any information that is inconvenient for their political agenda. Explained pretty well by this cartoon: Neither this email communication nor content posted to the website SovereignMan.com is intended to provide personal financial advice. Before undertaking any action described in this letter, financial or otherwise, you should discuss your options with a qualified advisor– accountant, financial planner, attorney, priest, IRS auditor, Tim Geithner… Also, nothing published in this letter constitutes encouragement to avoid or evade tax obligations in your home country. Furthermore, you should understand that SovereignMan.commay in some instances receive financial compensation for products and/or services which are mentioned in the letter, and in other cases,SovereignMan.com receives no compensation. The needs of the community come first, and the presence or lack of financial compensation in no way affects the recommendations made in this letter.

If you’d like to update your email address or no longer wish to receive our daily emails, click the link below: