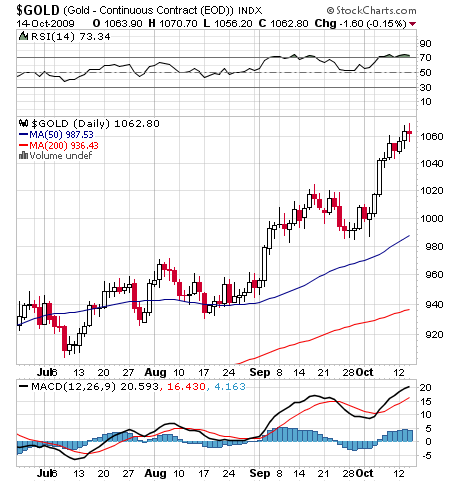 As for gold, we remain long of gold in Sterling terms, in EUR terms and in US dollar terms. As we have long said, the great bull markets in gold are currency agnostic; that is, the great bull markets in gold see gold rise in terms of any and all currencies. This is one such bull market.  Investors around the world are increasingly disdainful of currencies and are increasingly enamoured of gold, and why not?
Government… especially intrusive, left-of-centre government… always puts into place policies that diminish the value of their currencies, thus increasing the “value” of gold. We are not Gold Bugs here at TGL, but we are sufficiently dismayed by government actions… especially those of the Obama Administration… to accept the thesis most often promoted by the Bugs that “Gold is a store of value.” IT is that, and really very little more, but for now, that is sufficient to keep us long. Click HERE for larger image of long term chart from 1982 below:

Canadian Dollar – Moving even further one, the Canadian dollar continues to soar relative to the US dollar… along with the Aussie and the “Kiwi” dollars.  Landing here in Toronto last evening and finally catching a bit of the news, we listened as Prime Minister Stephen Harper said, regarding his currency, that he does in fact agree with the Bank of Canada’s recent assessment that a “too rapid” rise in the country’s currency is a risk.” What is important here is that he said “a too rapid rise.” He did not say that a quiet, sustained rise shall put the country at risk, but instead simply argued that volatility and sharp, severe bouts of strength can.  Mr. Harper further said that while some of the recent strength in the Canadian dollar reflects the reality of an economy that is strengthening, “obviously, the value of the Canadian dollar is a risk to recovery” if it is too rapid. He said:

I don’t think it’s a risk to choking off the  recovery, but if it goes up too rapidly it does have difficult effects on our economy…. The governor of the Bank of Canada has been  clear that a too rapid rise in the dollar is a risk to our recovery.

From Friday’s analysis on Canadian Dollar:

The Canadian dollar soared higher Friday and it remains firmer this morning despite the fact that Canada’s markets are all closed for Thanksgiving Day there. Over the years we’ve learned the very hardest of ways that when Canada’s markets are closed the C$ can have, and often does have, a rather erratic trading conditions. We cannot and will not be surprised to see the usually docile C$ trade in a much wider range today. But then again we shall not be surprised to see the C$ trade very quietly and within a very narrow range either. Forewarned is forearmed. However, what is important to note that Friday’s strength was properly predicated upon decidedly positive economic news there as the unemployment rate fell from 8.7% to 8.4% and as Canada’s correlative to our non-farm payrolls actually showed an increase of 30,600 jobs added in September. Bay Street had been looking for a net loss of jobs, so this figure caught everyone off, sending the C$ sharply higher as the market began to talk about the fact that the BOC might begin to raise rates, following Australia’s lead, sooner rather than later.  Recall, however, that the Bank said that its intention is to keep rates at the short end steady through mid-’10, and until we hear otherwise from the Bank’s leaders, we’ll “go” with what they’ve said in the past. Even so, this was an impressive statistic, and although it is not perfectly correlative, given that the US’ population is approximately 9.1 x’s that of Canada’s, this is the rough equivalent of US non-farm payrolls having rise 278,600 in the same month, when indeed US non-farm payrolls fell 263,000! Canadian’s may wail and gnash their teeth at the prospects of “par” between the US and Canadian dollars, but the harsh reality is that things are going better economically in the “Great White North” than they are in the Great Moribund South, with the Canadian dollar the beneficiary.

We have been bullish of the C$ for some rather long while, and we remain bullish of it this morning. The fact that the C$/US$ rate fell downward through 1.05 on Friday and is putting 1.04 to test this morning simply confirms our long held thesis that “par” is but a matter of time, and far beyond “par” only a matter longer: Ed Note: Dennis Gartman will be speaking at the: