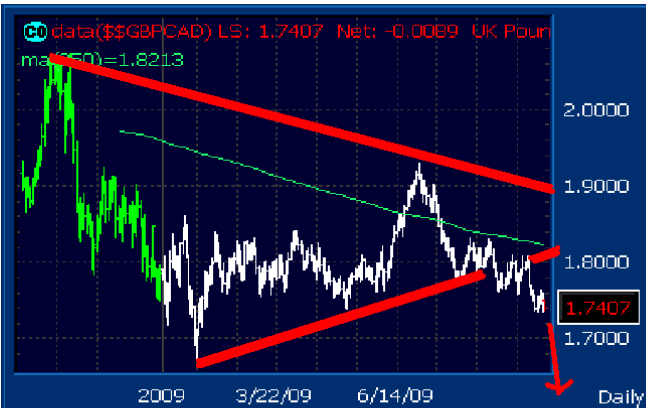 “We have been and we remain this morning concerted bulls of the Canadian dollar relative to the US dollar for the same reasons we have been bullish for the past several years on balance. The world needs energy: Canada has energy to go; The world needs food; Canada’s got food; The world needs base metals; they can be found in Canada…and Canada has the ports to ship those needs; it has the laws to protect contracts signed, and it has favourable and friendly relations with everyone… something the US cannot say it has or enjoys.” – From Dennis Gartman’s comment 9/15 HERE.

Turning then to trading, we are rather aggressively net short of Sterling vs. the US dollar, and in reality given that we are long of the Canadian dollar against the US dollar, we’ve actually “legged” our way into a long C$/Short Sterling trade.

Concerning the Canadian dollar, one thing we can be relative certain of is that the “Left” will not be calling for a vote of no confidence anytime soon, as they have tried to do in recent months several times. They won’t do so because the political winds are now beginning to blow rather severely against them and are blowing rather pleasantly for the centre-right Conservatives.

According to the latest poll taken of the political winds that are blowing by the CBC, the Tories have the support of 37% of those polled, up from 35.1% a few weeks ago, while the Liberal Party has the support of only 29.9%, unchanged over that same period of time.
The three lesser partiers, the New Democrats and the Bloc Quebecois, are divvying up the remaining support, with the former holding the support of 13.8%, down from 16.5%, while the latter has the support of 9.1%, down from 9.6.  The “Greens” have the support
of 10.2%, up from 9.0% previously.  Thus, on balance, support for the farther-left-of-centre parties is waning… and that once again is what Marta Stewart would call “A good thing.”  From our perspective, when the far Left’s support has fallen from 35.1% to 33.1%, while the Centre-Right’s support has risen by a couple of percent that is a very, very good thing.

Canada’s elections at the federal level are “first past the post” and that means that a party can win a majority in the Parliament without a majority of the voters. Thus, it tends to require roughly 40% of the votes to be cast for one party to assure that party a majority. Given how closed the Tories are to that magic 40% level, the Liberals cannot and likely will not put their own support to a test by risking an election.   The Liberals have tested the waters several times this year by floating the notion of a no-confidence vote and a swift election to follow, and each time the Liberals have stood down. Now, in light of the polls, they’ll not even raise the question of a non-confidence vote.