The Only thing to know about Real Estate now 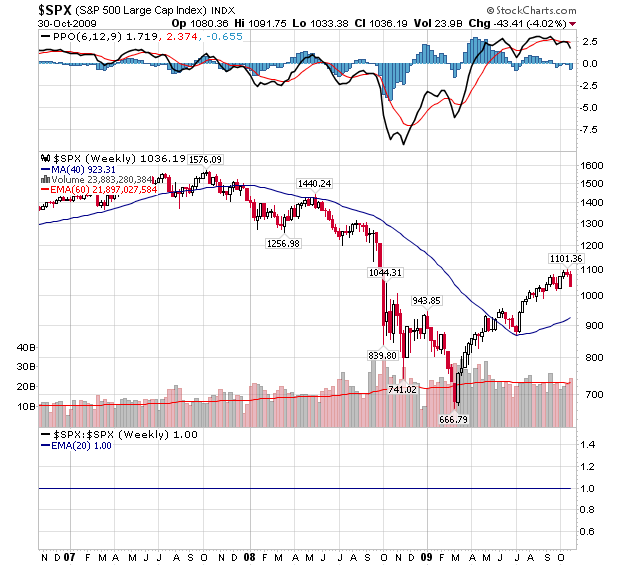 Home foreclosures have leapt into the hundreds of thousands…

….and experts predict that it will be worse next year. These foreclosed homes go to the banks. They tend to put banks in the real estate business, which is the last thing the banks want. So the banks sell or dump foreclosed homes at whatever price the market will bring.

My test of values in homes is as follows (it costs you 10% a year to carry a home) — when you can buy a home and immediately rent it out and make a profit on you original purchase plus expenses, that house is a value. Right now, real estate is hated. Too many people have lost their life savings in real estate. But the fact is that many foreclosed homes are now selling below the cost of replacement. And as commodity prices rise, this disparity will grow.

My conclusion is that many homes foreclosed by the banks and purchased from the banks are bargains. Today’s disaster may be tomorrow’s winner.

Stocks– Without a strong November and December, this decade will be the worst decade in stock market history. The decade from Jan. 1930 to Dec. 1939 showed a net loss of -1.7%. From Jan. 2000 to the present the S&P 500 has lost 13.8%. It will take a big November and December to take the current decade out of the “worst in history” class (statistics courtesy of InvestTech Research). Sundry items — Without a strong November and December, this decade will be the worst decade in stock market history. The decade from Jan. 1930 to Dec. 1939 showed a net loss of -1.7%. From Jan. 2000 to the present the S&P 500 has lost 13.8%. It will take a big November and December to take the current decade out of the “worst in history” class (statistics courtesy of InvestTech Research).

The US has the highest fertility rate of any developed nation — 2.1, partly due to immigration groups. In the US unmarried women now give birth to four out of every ten kids.

More people in the US live alone than at any other time in US history. Now that women are working, many would rather live alone than with an “unsatisfactory” mate. Women no longer need a husband to support them. And many don’t want one.

Headline article in the current Newsweek magazine — “Working Women Are Poised To Become the Biggest Economic Engine the World Has Ever known. . . The vast majority of new income growth will go to women, due to a narrowing wage gap and rising female employment. . . . Women already control $12 trillion of the world’s $18.4 trillion in annual consumer spending. And that proportion will likely rise.”

Russell Comment — Follow the money. Subscribers know that I believe this century will be known as “the world rise and empowerment of women.” Women are so important to a nation’s welfare that pressure will now come to all undeveloped nations who “keep women down.” The state of civilization can be judged by how a nation treats its women. Women all over the world (including African women) are rising and fighting for equality. Even Saudi Arabia is giving in to what I call the “women force.” I, Russell, have four daughters, so of course I’ve always been an advocate for women’s rights.

In thinking over the weekend, it occurred to me (light bulb turns on) that everyone has a THEME that, in some ways, dominates and directs their lives. That theme is the driving force, the core of a lifetime’s desire, that runs through every person’s life. After pondering over the idea for hours, it occurred to me that my own theme is “staying alive.” I was born struggling to stay alive. That theme colored my life. My fascination with Cacti fits into my theme. Cacti are the ultimate survival plants. The stock market — learning to read the stock market gives one the advantage of possibly knowing what lies ahead. The theme of staying alive has entered into everything I do. It’s the reason why, in investing, I’m so careful to avoid taking the big loss. “He who sells and runs away, lives to invest another day.” If you invest intelligently and systematically over the years and avoid the big loss, you’ll probably end up at least prosperous.

You might think about a theme in your own life. Is your theme success, domination, making money, leadership, happiness, conquest, curiosity, helping others, adventure? Ask the average person what the theme of their life is, and they’ll look puzzled. They never thought about their life having a theme. Every person has a theme in their life. It’s worth knowing what that theme is. If you’re honest with yourself, you can identify your theme.