The Number One Economic Indicator 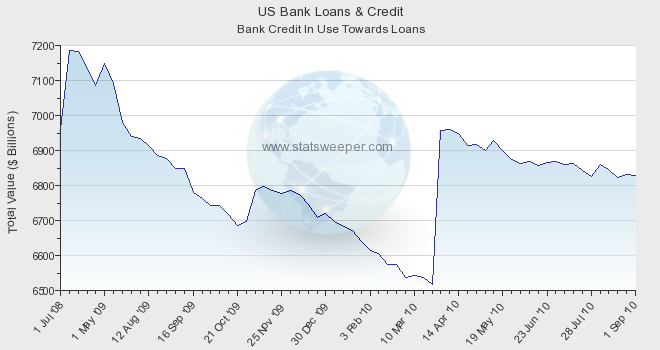 We’ve gathered a lot of new readers to the Pierce Points list the last few weeks. Glad to have you with us.

You’ll find there are certain themes that reoccur often in this missive. One of them is U.S. credit.

Analysts look at a lot of different numbers to try and figure out which way the global economy is heading. I have a handful that I think cover most of what anyone needs to know. And by far the most important is loans outstanding in America.

Here’s why. Between 1983 and 2008, the economic boom in the U.S. (and largely the world) was accompanied by massive credit growth. Loans outstanding at U.S. commercial banks jumped from $1 trillion to nearly $7.5 trillion in just 25 years.

Credit growth was particularly pronounced between 2003 and 2008. Those five years alone accounted for $3.5 trillion in new loans issued in America.

The interesting thing is this steep jump in loans coincided very closely with China’s “coming of age” as an economic superpower. As Americans borrowed more, they bought more. And increased consumption led to increased imports, particularly from Asia. Helping economies like China super-charge themselves.

Now here’s the rub. Credit growth in America is broken. Since late 2008, the U.S. has seen its first deep and protracted decrease in loans outstanding in the last 40 years. The chart below tells the story well (the “spike” in credit early in 2010 was caused by new accounting rules which brought off-balance sheet loans back onto the books at commercial banks). If you factor out the accounting adjustments, loans outstanding have fallen by almost $1.5 trillion in just two years. A phenomenal decrease in credit, and thus American spending power.

The most interesting thing is this indicator has not recovered. While investment inflows in many sectors this year have lifted stocks, commodity prices, and trade numbers, loans have continued to fall.

Americans are not borrowing. Even low interest rates can’t make them. Meaning the engine that drove the last few decades of growth is now broken. Without such support, it’s going to be difficult (probably impossible) for America to return to the surging economic times it enjoyed leading up to 2007.

It’s this chart that makes me skeptical on any claims we’re on our way back to a rosy, pre-financial crisis economic world. The financial landscape today in America is much different than it’s been for most of recent memory.

The only encouraging point is loans haven’t been disappearing as fast as they were. Over the last three months, the trend has flattened.

This could help stabilize things. But it’s sure not a recovery. With this indicator lagging, we’re not going to get back to the good old days anytime soon.

Here’s to spending within your means,

Dave Forest’s analysis on the natural resources sector has been featured on BNN, Kitco.com, Financial Sense and the Daily Reckoning. He has been a recent speaker at conferences in Calgary, Chicago, Las Vegas, Toronto and Vancouver. He is a professional geologist and formerly advised a worldwide client base on oil/gas, mining and renewable energy at Casey Research LLC. Dave currently serves as managing director of Notela Resource Advisors Ltd.