The New Breed of Destruction 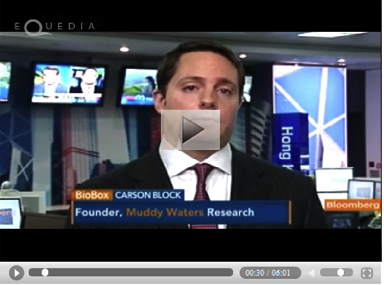 Not long ago, buying Chinese stocks, or any stocks with the word Sino in it, was a great way to benefit from the world’s hottest emerging market. But in the last few weeks, all of that has taken a turn for the worst.

Chinese companies listed on the world’s most prominent exchanges have tumbled this month after a recent accusation by Muddy Waters’ Carson Block stating that Canadian-listed Sino-Forest (TSX: TRE) is involved in fraud by overstating both its sales and assets.

If you missed these recent events, the report caused a major ripple effect to worldwide Chinese companies causing shares of these companies to tumble. Following the report by Muddy Waters, international bond markets have shut out many Chinese issuers. But this isn’t the first time it has happened.

But does that mean we should run for the front door?

While accounting discrepancies and mistakes are found all over the world, everyone has their eyes set on the biggest emerging market of them all: China.

When you’re that big, you’re setting yourself up for a big target.

In the matter of Sino-Forest, I think short seller Muddy waters used it to their advantage to make a boat load of money. We still don’t know if any of the accusations are true. If it turns out to be false, you can bet we’ll see Sino-Forest shares surge and big time lawsuits in the coming months.

Think about it. Just a few short months ago, Sino-Forest was worth over $6.3 billion in market cap. At the time of this writing, it’s worth only $783 million losing nearly $5.5 billion in shareholder value.

Muddy Waters prime objective is selling stock short. By taking advantage of the markets’ nervousness surrounding Chinese companies, it released a negative report on Sino-Forest allowing them and their cohorts to short sell millions of dollars worth of stock and thus making millions of dollars off the losses from investors in the company.

Before the report was released, it was distributed to hedge funds around the world, so that more short sellers would join the party causing the stock to fall dramatically in share price.

Keep in mind that I am just assuming how much Muddy Waters and those involved are making from the short selling of Sino-Forest. It could be thousands. It could be millions. Heck, it could even be billions.

I think that while Muddy Waters is doing research on these Chinese companies, somebody should do some research on them. The company has no listed address, and no real history. Carson Block, the man behind Muddy Waters, says that they don’t list an address because of death threats that he has received.

This is what I found on Muddy Water’s website in their “About Us” section:

“Muddy Waters Research sees through appearances to a Chinese company’s true worth. Our research director, Carson Block, is an entrepreneur who’s practiced law and pioneered an industry in China. Our team members are likewise veterans of China’s business trenches who similarly understand how business is really conducted in China. Through their successes and struggles, they’ve developed the knowledge and contacts to navigate China’s muddy waters.

Muddy Waters Research is available to work with institutional investors on an engagement basis.”

So who are the directors? Who is Carson Block? What background does he have in research? None of this is listed on their website.

Last year, a researcher with Muddy Waters told management at  Orient Paper, Inc. (AMEX: ONP), the first Chinese company targeted by the short seller back in 2010, that he would write a research report for them in return for US$300,000. Apparently, Orient Paper declined the offer and two months later, Muddy Waters issued their initial report calling the company a fraud. Carson Block denies these allegations.

The report said, “We are confident that [Orient Paper] is a fraud. Its purpose is to raise and misappropriate tens of millions of dollars.” On the front page of the report was a disclaimer that Muddy Waters had shorted the stock.

The report said the conclusion was not based on an analysis of Orient Paper’s books, but by talking to its customers, contacting suppliers of assets comparable to what Orient Paper said it had bought, having “experts” analyze photos of the company’s production equipment, and drawing conclusions from a visit to the Orient Paper factory in January 2010.

At the end of the day, it doesn’t matter if information or research is real or fake. The market will always react first, and ask questions later.

I found it absolutely appalling that even some of the biggest media outlets and names, including Lou Dobbs, would (without their own research) go out on a limb and say that all of these Chinese companies are fraudulent. It’s absurd. But that’s the stock market. It’s always sell or buy first and ask questions later. There are many groups and websites who issue negative reports on stocks they decide to short in order to profit. With a big enough following, these groups can wreak havoc on companies. I guess to them it’s no different than giving a buy recommendation to hike up the price of a stock they want to sell.

I feel bad for the investors involved in this recent debacle. At the same time, I can’t help but think how smart (or conniving) it was for Carson Block to take advantage of the insecurities of the market.

For the full interactive newsletter and report, please follow this link HERE

If you have not already subscribed to Equedia Weekly, you may sign up HERE

Although the Company has attempted to identify important factors that could cause actual results to differ materially, there may be other factors that cause results not to be as anticipated, estimated or intended. There can be no assurance that statements containing forward looking information will prove to be accurate as actual results and future events could differ materially from those anticipated in such statements. Accordingly, readers should not place undue reliance on statements containing forward looking information. Readers should review the risk factors set out in the Company’s prospectus and the documents incorporated by reference.