THE NASDAQ: A Trend Line Broken… On Rising Volume Too! 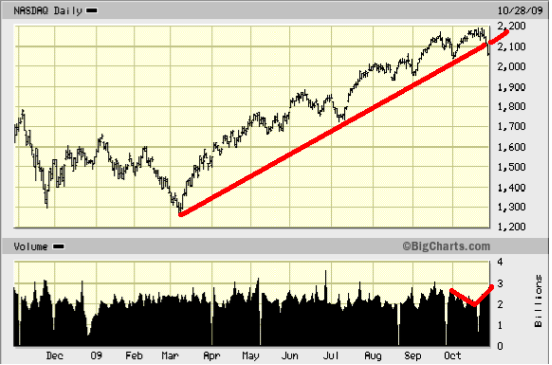 “Even the most adamantly bullish amongst us has to admit that the NASDAQ’s performance over the past several days has been anything other than bullish and that the trend line drawn here has clearly been  broken… clearly!”

“At the moment, we fear that we are only now seeing the beginning of this selling; that the public has only just gotten long after remaining out; and that they’ll not begin liquidating until prices are lower and their hopes have been dashed yet again.”

Finally, we wish to keep things as simple as possible, for all too often complexity breeds confusion.  The advance here in the US has been led by what we’ve referred to as “The Generals:” Apple and Goldman Sachs. They were, and they are, the very best of breed, and their leadership rallied the lesser troops around them to move higher; to charge high; to rise to greater heights in the bull run from the March lows.  But yesterday, the Generals were, if not killed, seriously wounded. GS left an “island reversal” to the downside two weeks ago, and yesterday, the uptrend line that defined the bull run was unequivocally broken. One General dead.