The Most Undervalued Currency in the World 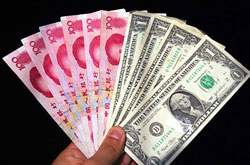 When the leaders from the 20 most powerful countries in the world (including China) met last month, they left with a pledge to work toward rebalancing global economies.

That means countries running large trade deficits, like the U.S., would save more, consume less, and produce more … and export-driven economies, like China, would spend more and export less.

That’s a lofty goal. Even lip service to some. To me, it’s a statement that speaks directly to China. It’s “code” that China needs to stop manipulating its currency.

Lopsided trade was a key driver in the asset price bubbles over the past few years and the continuation of these imbalances are a recipe for another rendevous with global recession.

That’s why the G-20, the IMF, the OECD — all of the major institutions and central banks of the world — are talking about the importance of repairing imbalances.

And, again, it all boils down to China …

While most of China’s major economic competitors around the world have seen their currencies climb against the dollar by 20 percent, 30 percent, 40 percent … even 50 percent in the last eight months … the Chinese yuan has been virtually unchanged.

That’s because China controls the value of its currency. And that creates a major advantage for Beijing in the competition for world exports. It’s a primary reason China has been able to achieve such a rapid rise in global economic power.

China’s currency policies have long been a problem for the United States. Cheap Chinese goods and cheap credit fueled a consumption binge for U.S. consumers and a massive trade deficit. While other world currencies have climbed against the dollar, the Chinese yuan has been virtually unchanged.

Prior to the financial crisis, the U.S. was on its own to convince China to adopt a more “flexible currency regime” … i.e. stop keeping its currency artificially weak.

The results were modestly successful — only after the U.S. Congress threatened to impose a tariff on Chinese imports! China allowed its currency to appreciate by 17 percent against the dollar between 2005 and 2008.

But since the financial crisis, China has returned to a peg against the greenback. Its authority to determine the value of its own currency and to stockpile U.S. dollars through one-way trade has put China in a position of strength against the rest of the world.

That’s why when the rest of the world was in recession, China was still churning out growth and is now outperforming in the early global economic recovery phase.

Look, it’s no secret that China has the most undervalued currency in the world. In fact, the Chinese yuan would have to appreciate more than 40 percent against the U.S. dollar to bring the exchange rate in line with economic fundamentals.

To make matters worse, a weakening dollar and recovering global appetite for risk has sent world currencies soaring over the past eight months. But Chinese currency has been weakening along with the dollar, an effective devaluation against its Asian trading competitors.

Because of this currency advantage, China has been winning even more share of the world export market.

And countries that need healthy exports to work their way out of recession are losing out. That’s why over the course of the last few weeks we’ve seen South Korea, Taiwan, the Philippines, Thailand, Indonesia and Hong Kong all intervene to weaken their currencies.

Meanwhile, Major Developed Economies
Are Losing Out, Too. So …

The China currency issue will likely become a major global point of contention.

Remember, to put the world back on a sustainable path to growth, the G-20 pledged to …

And avoid competitive currency devaluations.
All three of these key issues have a lot to do with China’s currency policies.

In an indirect way, the world is telling China to stop manipulating its currency and to work on creating a more balanced economy by cultivating domestic demand.

If China continues to manufacture a weak currency, dump cheap products on the rest of the world, and stockpile currency reserves, points number 2 and 3 will grow in scale and frequency.

That’s a major threat for the global economy.

For now, traders are beginning to make bets that China will placate the rest of the world with some appreciation in its currency. But not much.

The chart below shows the U.S. dollar vs. the Chinese yuan. The red line shows a Beijing-manipulated exchange rate while the blue line indicates the market’s expectations for where the exchange rate will be in twelve months:

As you can see with the red line, China started allowing its currency to appreciate in 2005, at the rate of about 6 percent a year. But in 2008 that gradual strengthening of the yuan came to an abrupt halt.

Now the market expects the yuan to start trading higher again from the dynamics I mentioned above, but only 2 percent by this time next year.

This won’t be nearly enough to keep its counterparts at bay.

I’m looking for this discussion on China’s currency to heat up. And the potential political fallout could cause quite a stir for the global economy and currencies.

Bryan Rich is an accomplished currency specialist with more than 12-years of experience in trading, research, and consulting in the global foreign exchange markets. He is President of Logic Fund Management, a currency management and consulting firm.

Bryan began his career as a trader for a $600 million family office hedge fund in London. The macro-oriented fund managed assets for a prominent European family, and was one of the largest players in global currency markets in the 1990s. Later, he was a senior trader for a $750 million leading global macro hedge fund located in South Florida. There, he helped manage and trade a multi-billion dollar foreign exchange options portfolio.

His consulting resume includes work for a boutique currency fund in New York, where he developed trading models and strategy for the core investment program of the company. He later joined the company as a partner, based in their Wall Street office.

Bryan has also served for several years in a management and consulting role for the Weiss Group, performing in a variety of analytical areas across its economic research, money management, ratings, and institutional research divisions.

He has a BA from the University of North Florida and an MBA from Rollins College.