Crashes and the Madness of Crowds 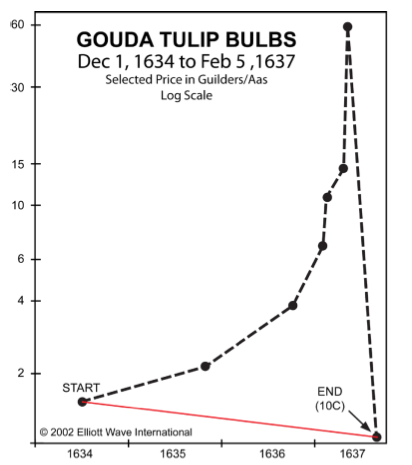 Could a mere tulip bulb be worth $76,000? It is if people are willing to pay for it! It may sound preposterous, but this is exactly what happened in Holland in the 1630’s. The amount the market declined from peak to bottom: This number is difficult to calculate, but, we can tell you that at the peak of the market, a person could trade a single tulip for an entire estate, and, at the bottom, one tulip was the price of a common onion.

Synopsis: In 1593 tulips were brought from Turkey and introduced to the Dutch. The novelty of the new flower made it widely sought after and therefore fairly pricey. After a time, the tulips contracted a non-fatal virus known as mosaic, which didn’t kill the tulip population but altered them causing “flames” of color to appear upon the petals. The color patterns came in a wide variety, increasing the rarity of an already unique flower. Thus, tulips, which were already selling at a premium, began to rise in price according to how their virus alterations were valued, or desired. Everyone began to deal in bulbs, essentially speculating on the tulip market, which was believed to have no limits.

The true bulb buyers (the garden centers of the past) began to fill up inventories for the growing season, depleting the supply further and increasing scarcity and demand. Soon, prices were rising so fast and high that people were trading their land, life savings, and anything else they could liquidate to get more tulip bulbs. Many Dutch persisted in believing they would sell their hoard to hapless and unenlightened foreigners, thereby reaping enormous profits. Somehow, the originally overpriced tulips enjoyed a twenty-fold increase in value – in one month!

Needless to say, the prices were not an accurate reflection of the value of a tulip bulb. As it happens in many speculative bubbles, some prudent people decided to sell and crystallize their profits. A domino effect of progressively lower and lower prices took place as everyone tried to sell while not many were buying. The price began to dive, causing people to panic and sell regardless of losses.

Dealers refused to honor contracts and people began to realize they traded their homes for a piece of greenery; panic and pandemonium were prevalent throughout the land. The government attempted to step in and halt the crash by offering to honor contracts at 10% of the face value, but then the market plunged even lower, making such restitution impossible. No one emerged unscathed from the crash. Even the people who had locked in their profit by getting out early suffered under the following depression.

The effects of the tulip craze left the Dutch very hesitant about speculative investments for quite some time. Investors now can know that it is better to stop and smell the flowers than to stake your future upon one.

A bubble is a type of investing phenomenon that demonstrates the frailty of some facets of human emotion. A bubble occurs when investors put so much demand on a stock that they drive the price beyond any accurate or rational reflection of its actual worth, which should be determined by the performance of the underlying company. Like the soap bubbles a child likes to blow, investing bubbles often appear as though they will rise forever, but since they are not formed from anything substantial, they eventually pop. And when they do, the money that was invested into them dissipates into the wind.

For more interesting Crashes click on the links below: