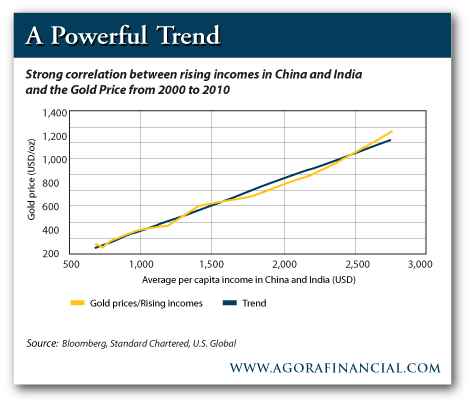 After Tuesday’s beat-down and Wednesday’s recovery, precious metals are holding steady. At last check, gold is at $1,598.

Of course, the short correction brought with it the usual cries of “bubble” in the gold market. Even here in our own household, we fielded questions on the subject…

“Don’t believe what you read about record-high gold prices,” advises our friend Frank Holmes not a moment too soon. “Yes, gold hit a high in nominal terms, but the price is more than 30% below the 1980 peak of $2,400 an ounce if you adjust for inflation.”

And that, we believe, is only the beginning of the story.

“Gold is about to get even more attractive because we are heading into the fall and winter gift-giving season,” Frank continues. “This is the time of year when gold jewelers typically do their biggest business. The kickoff is the Muslim holy month of Ramadan, which starts next month and ends with generous gift giving in early September.”

As with recent years, the drivers of this seasonal strength are China and India: “Back when the average per capita income in China and India was well below $1,000 a year,” says Frank, “gold prices hovered just above $200 an ounce. As average incomes have approached $3,000 a year over the past decade, gold prices have followed.

“With the long-term outlook for wages in both these economies rather rosy, gold demand should continue to feel the trickle-down effect.”

Another indication gold is still a good buy: the gold-oil ratio is still three points below its historic average.

The gold-oil ratio measures the number of barrels of Brent crude it would take to equal one ounce of gold. Citing research from Capital Daily, Frank points out the ratio is currently 13.5.

“Gold prices would need to rise to $1,870 an ounce,” Mr. Holmes calculates, “in order to reach historical ratio levels with $117 per barrel Brent crude oil.”

Addison Wiggin
for The Daily Reckoning

Other Articles at The Daily Reckoning: