The Final Pieces of the Puzzle in place……. then lookout 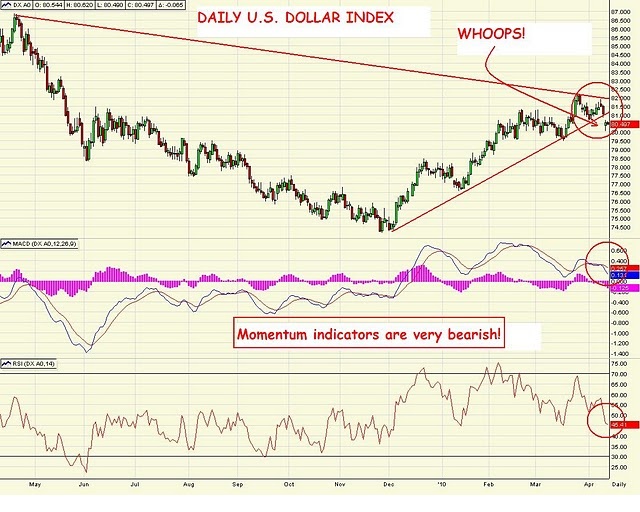 U.S.  Stock Market – The final pieces to the puzzle are coming together as planned. The close above DJIA 11,000 has indeed empowered the “Don’t Worry, Be Happy” crowd. The media has been full of chest-beating bulls and the public is biting the apple again. This is just a sample of the emails I’ve received in the last 48hrs:

I might mention that this person failed to note my buy signal just one day from the bottom in March, 2009 and my consistent call for DJIA 11,000 and an economic recovery through June-July of 2010. But his extremely half-full cup view of the stock market and economy has fast become the way of the land. I fully suspect and hope it shall continue for awhile longer so I can say without reservation what the leader of the “A-Team” was famous for.

U.S. Dollar – I’ve suggested for months that the U.S. Dollar was merely in a typical and necessary “countertrend” rally within a secular bear market. Like the U.S. stock market, it too is pretty much playing out as anticipated. I have spoken of late how momentum was failing. As you can see, we broke below an uptrend line and it’s natural for the market to rally back to that line. I continue to use 83-84 as the maximum upside potential in this bear market rally and think it’s still too early to look for a renewed decline. We could see a multi-month rather narrow trading range.

Gold – What can I say that I haven’t said already? I continue to find it amusing how continuously-wrong gold forecasters are still taken into consideration by some. The latest being the GFMS so-called forecast. Between them and the “Senior Analyst”, I can’t think of anyone who has been more consistently wrong. We remain in the “mother” of all gold secular bull markets and the number of forecasters who have called for its demise only to be trampled over just grows and grows.

U.S. Bonds – We get as close as one can get to breaking the back of the multi-decade bond bull market only to see enough of a rally to hold off the inevitable. To me, it’s a question of when, not if, a new multi-year bear market in bonds takes hold.

Northern Dynasty Minerals CEO appeared on BNN and also was picked by “Smartrend”.

As Israel continues to get painted into a corner, the world as a whole basically ignores the reality of the Iranian threat. The fuse on this geopolitical nightmare continues to shrink as activities not making the front page of news reports continue to unfold as I speak.

America has become a two-class society. The silent majority is becoming vocal and then some while President Obama continues to avoid the media.

And finally, video that wasn’t shown during the Masters broadcast.