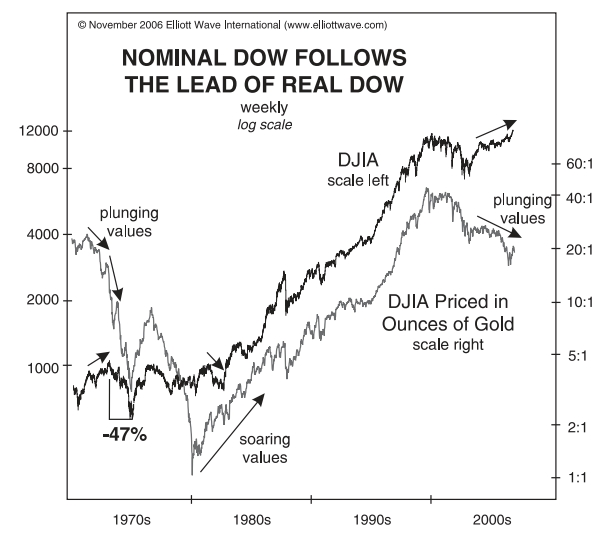 “Your cheating chart will tell on you.”

Hank Williams may not have known about Elliott waves, but he did know when a story doesn’t add up.
Such is the case with the nominal rise of the Dow Jones Industrials from 2000 to 2007. In the language of country music, this stock index has a “Cheatin’ Chart” — it doesn’t tell the real story.

Download Robert Prechter’s FREE 40-Page Gold and Silver eBook. This valuable ebook explores the role of gold in today’s markets like no other resource has attempted. You will get more than Prechter’s long-term outlook on gold and silver; you’ll also learn how gold still plays an important role in determining the real value behind nominal share prices. Learn more, and download your Gold and Silver eBook HERE.

You don’t have to tell Bob Prechter this: He knows. A simple price chart of the Dow is, well, a bit too simple. First Bob explains that pricing via fiat currency is not the same as pricing the Dow in terms of real money (namely gold). Then he shows the difference.

For six long years, we’ve had declining real values in stocks. Since the 2002 bottom, we’ve had rising values in nominal terms. This is the same set-up that we saw in the early ’70s except for one thing: it’s bigger. . .Ultimately, real prices are leading dollar prices, and we’re going to see a tremendous drop in the dollar price of the Dow as well, because I’m making a case that this is a much bigger top. – Elliott Wave Theorist, December 2006

If gold were our money, the major stock market indexes would have declined relentlessly from 2000 to the present, with a muted bounce in 2003. There would be no arguing the point of whether a bull or bear market was in force.

This “oh-so-true” chart of the DJIA priced in gold showed the path that the “cheatin’” nominal Dow would eventually follow. Our forecast was that it’s just a matter of time. This analysis has played out as expected several times since the 1999 high in the Dow Jones Industrials.

The July 1999 top in the real Dow was the first in a long succession of rolling blow-offs that (The Elliott Wave Financial Forecast) successfully identified From the DJIA’s orthodox top in 2000 to the NASDAQ’s all-time high several weeks later to the top in residential real estate prices in 2005 to the nominal peaks in major stock indexes in 2007 to the wild commodity spikes in 2008, EWFF managed to anticipate many of the markets major trend changes. . .We owe these forecasting successes to the Wave Principle and its reflection of market psychology and its foreshadowing of larger social forces. – Elliott Wave Financial Forecast, July 2009

The monthly Elliott Wave Financial Forecast keeps a tireless eye on stocks, real estate, commodities and much more. We also keep track of the precious metals and the dollar — and even keep our finger on the pulse of developing social trends.

The quotes above confirm the power of Elliott wave analysis in identifying market turns in various asset classes.

Download Robert Prechter’s FREE 40-Page Gold and Silver eBook HERE. This valuable ebook explores the role of gold in today’s markets like no other resource has attempted. You will get more than Prechter’s long-term outlook on gold and silver; you’ll also learn how gold still plays an important role in determining the real value behind nominal share prices.