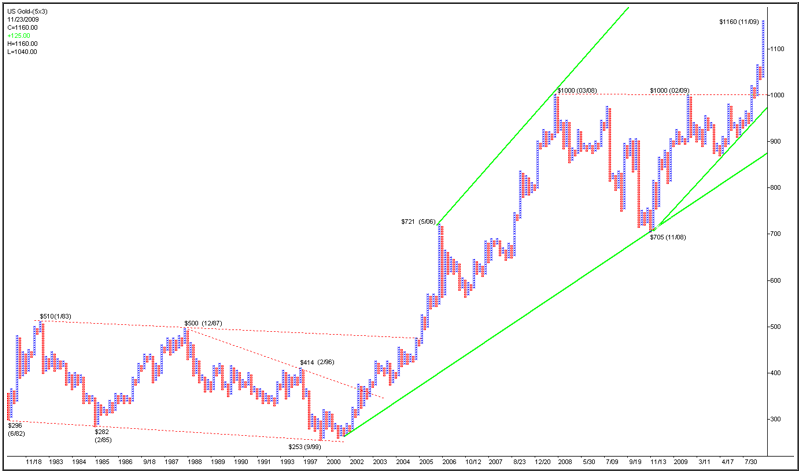 Richard Russell has made his subscribers fortunes. One of the best values anywhere in the financial world at only a $300 subscription to get his DAILY report for a year. HERE to subscribe.

Richard  has been Bullish Gold since below $300. He also loaded up on bonds in the early 80’s when US Treasuries where yielding 18%+. A 30 year bonds through compound interest would turn $1,000 into $300,000 at maturity. (include reinvestment of interest income, which Richard does as his view is compounding interest is the ROYAL ROAD to RICHES)

Many years ago, when I was still living in NYC, I had a subscriber, a Swiss man named Jay Pfister. Jay owned a chemical company. During the early 1930s Jay sold his company to American Cyanamid. That sale made Jay quite wealthy, and he had a home in NYC and one in La Jolla. It was Jay who first told me about La Jolla. Jay suggested that I leave Manhattan and enjoy “a better life” in La Jolla. I thought a lot about Jay’s advice. In 1961 I followed his advice, and it proved to be one of the best pieces of advice I’ve ever received.

One day I met Jay at the Plaza Hotel on 59th Street. We were sipping coffee, when Jay said, “I want to tell you an interesting story. My apartment overlooks the Hudson River. Last Sunday I was looking out over the Hudson, and I saw two large boats heading towards each other. They continued to close in on each other, and I said to myself, ‘This is ridiculous’. The captains must be drunk. If they continue on this path, they’re surely going to crash.”

I looked wide-eyed and asked Jay, “So what happened?”

Answered Jay, “The ‘impossible’ happened. The two boats continued toward each other, and they crashed.”

I never forgot that story. And I apply it to the current economic situation in the US. America has created, according to the experts, 50 to 100 trillion of dollars in unfunded liabilities including Social Security, Medicaid, money spent for stimulus, money promised for future Federal construction plans. The arguments and warnings are that if the US continues to spend in this manner, the dollar will collapse and the nation will be broke. Impossible, you say, but then I think of Jay Pfister’s story about the two boats.

And the question I ask myself is this — will our vote-sensitive politicians have the guts to do what’s necessary to save the nation? This will mean that for the first time since World War II the US will have to cut back and live within its means. I try to envision how this will happen and what it will be like, and I really have trouble envisioning it.

Here’s what I think will happen. Before the potential catastrophe actually occurs, the markets will sound the alarm. The dollar will lose its reserve status, and the US will sink into a serious slump. If the dollar becomes an unwanted currency, fiat or central bank-created currencies (all are currently backed with dollars) all over the world will cave in. The knowledgeable money will rush to the only money that cannot go bankrupt — gold. The panic for gold will be unprecedented, and new currencies will have to be created. To have any authority, the new currencies will have to be backed by gold. In the panic to buy gold, the metal will rise to undreamed-of heights.

Question — Russell, if there is a stampede to buy gold, how do you think it will start?

Answer — If there’s a panic to buy gold, I think it will start in China, aided by other Asian nations and probably by Russia. I think China seriously doubts that the US will cut back and do what has to be done to save the dollar. Therefore, I believe China is on a path of accumulating as much of the world’s gold as possible (they’re doing the same thing with rare earths). At some point, the Chinese renminbi will be seen as the world’s strongest currency. The Chinese will then partially-back the renminbi with gold, at which point the renminbi will be the world’s new reserve currency. The dollar will be an unwanted “has-been.” I’ve said many times that the Achilles Heel of the US economy is the dollar and its reserve status. The Chinese know that very well. The 84 yr. old writes a market comment daily since the internet age began. In recent years, he began strongly advocated buying gold coins in the late 1990’s below $300. His position before the recent crash was cash and gold. There is little in markets he has not seen. Mr. Russell gained wide recognition via a series of over 30 Dow Theory and technical articles that he wrote for Barron’s during the late-’50s through the ’90s. Russell was the first (in 1960) to recommend gold stocks. He called the top of the 1949-’66 bull market. And almost to the day he called the bottom of the great 1972-’74 bear market, and the beginning of the great bull market which started in December 1974.