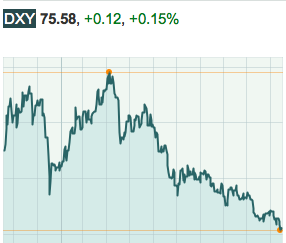 Commentary: Technically, the dollar is ripe for a rally…

Last March, the safe haven that was the U.S. dollar peaked in price at $89.50, as represented by the cash Dollar Index (DXY), as fear of a stock market collapse subsided. The relentless, multi-month slide in the value of the U.S. dollar has garnered a lot of attention of late, particularly as some nations, perhaps China in the Far East and purportedly Saudi Arabia in the Middle East, have diversified out of dollars in the past year and, more significantly, not-so-secretly have discussed replacing the dollar as the world’s reserve currency.

In reaction to the trio’s comments, the dollar stabilized and even rallied a touch (less than 1%) last Friday, but on Monday and Tuesday it once again retreated to new multi-month lows at $75.73.

Traders and investors have to be wondering what did The Big Three U.S. monetary officials hope to accomplish with their jawboning support of the dollar? Plainly, and perhaps embarrassingly, they did not (apparently) dissuade many dollar detractors from remaining in their short positions. In fact, the lack of a sustained positive reaction may have encouraged the establishment of more and larger dollar short positions!

If Messrs. Geithner, Summers, and Bernanke wanted to avert an exodus from the greenback, then “mission definitely not accomplished.” On the other hand, if the U.S. officials merely wanted to slow the rate of decline of the dollar (the Obama Administration really does not care if the dollar depreciates, only how fast), then maybe, maybe, they accomplished something for a day or two, or, at most, a week.