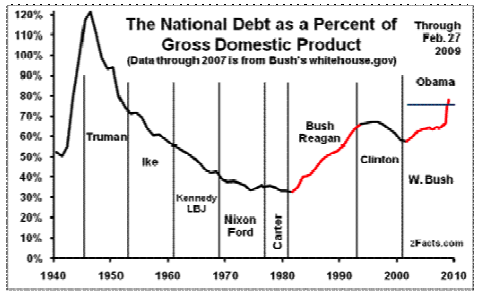 1.  I am very proud to introduce the writings and thinking of my son Chris Berry in this edition.  Chris will write from time to time.  he has an excellent knowledge of the markets and what is happening in the global economy.

2. A most important event in the life of Quaterra Resources’ shareholders current and future.  Please read this Morning Note.  Goldcorp has made a major commitment to the Quaterra Team headed by Dr. Thomas Patton.  The equity market is recognizing the deal this AM.

For all the ink spilled during the past 18 to 24 months regarding banking woes, there is another, perhaps more sinister problem that has been comparatively overlooked. It is becoming clear that debt on balance sheets of sovereign nations is out of control. For a few countries in particular, it’s time to pay the piper.

A case in point is Greece. The governments of both Iceland and Latvia have preceded this country in collapsing, but what is most surprising is the fact that a member of the Euro zone has followed suit– a developed rather than a developing nation is experiencing these issues for the first time. With a debt to GDP ratio of 138% and skyrocketing short-term bond yields it’s worth looking at how Greece got itself into this mess and what lessons we can learn from it.