The Day The Market Almost Died 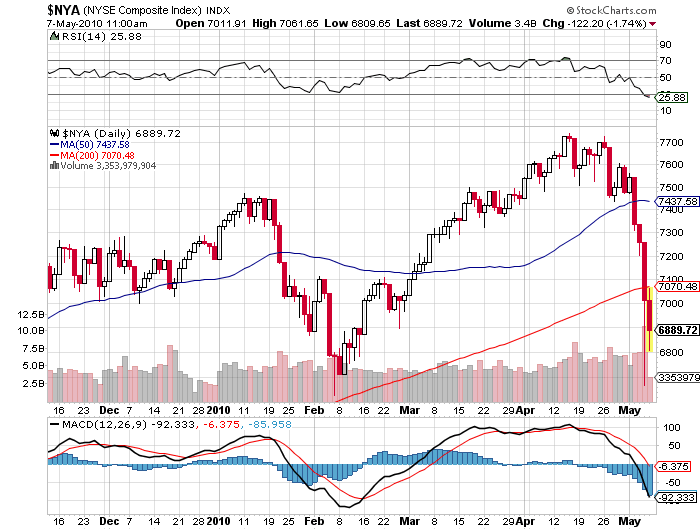 Richard Russell Comment: Any damage done? The chart below is a daily of the NYSE Composite, which includes ALL the stocks on the NYSE. The chart looks like a “head” that is chopped off at the neck. It’s a nasty looking piece of work. Should we blame it on all Greece? I’m doubtful – I think something else is wrong. This distribution top began back in late-March, before the world started wringing its hands about Greece. The Day The Market Almost Died (Courtesy Of High Frequency Trading) via ZeroHedge.com

A year ago, before anyone aside from a hundred or so people had ever heard the words High Frequency Trading, Flash orders, Predatory algorithms, Sigma X, Sonar, Market topology, Liquidity providers, Supplementary Liquidity Providers, and many variations on these, Zero Hedge embarked upon a path to warn and hopefully prevent a full-blown market meltdown. On April 10, 2009, in a piece titled “The Incredibly Shrinking Market Liquidity, Or The Black Swan Of Black Swans” we cautioned “what happens in a world where the very core of the capital markets system is gradually deleveraging to a point where maintaining a liquid and orderly market becomes impossible: large swings on low volume, massive bid-offer spreads, huge trading costs, inability to clear and numerous failed trades. When the quant deleveraging finally catches up with the market, the consequences will likely be unprecedented, with dramatic dislocations leading the market both higher and lower on record volatility.”