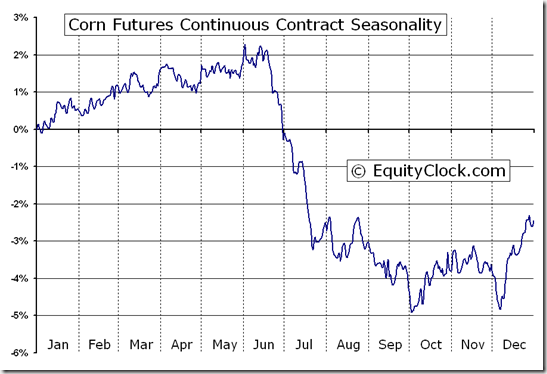 “If I were buying anything I’d be buying agricultural commodities,” “Going forward we’re going to have huge shortages of everything – including farmers – I think ag will be a great place for the next 10-20 years” – Jim Rogers 12/30/2011 Analysis has revealed that with a buy date of December 6 and a sell date of June 13, investors have benefited from a total return of 95.14% over the last 10 years. This scenario has shown positive results in 6 of those periods. – by Don Vialoux of EquityClock.com Analysis has revealed that with a buy date of December 6 and a sell date of March 12, investors have benefited from a total return of 58.35% over the last 10 years. This scenario has shown positive results in 5 of those periods. -by Don Vialoux of EquityClock.com Analysis has revealed that with a buy date of October 22 and a sell date of July 13, investors have benefited from a total return of 1276.17% over the last 10 years. This scenario has shown positive results in 8 of those periods. – by Don Vialoux of EquityClock.com

If there is an epicenter of the nation’s farmland boom, it can be found here amid the rolling hills of northwest Iowa.

A fortune is being plowed into the dirt of Sioux County, where well-heeled farmers and wealthy investors compete fiercely for some of the most fertile land in the Corn Belt. While farmland prices across Iowa have been among the heartland’s fastest growing – up 261 percent since 2000 – they’ve more than tripled in Sioux County, rising faster than most of the state.

Locals could not be more pleased about such prosperity – or more nervous.

Like many people across the Midwest, they’re increasingly anxious of a potential pull-back in values, despite stark economic differences with the 1980s farm crisis.

But their greatest fear is that if this boom turns to bust, as the housing market did last decade, people may well trace one of the key causes to this corner of the Hawkeye State — and blame local farmers and investors for creating an artificially inflated benchmark for the Midwest.

In what has been termed the “Iowa effect,” farmers and ranchers across the nation now routinely look to this 768-square-mile county as a benchmark for America’s 408 million acres of crop land. Record-setting land deals in this corner of the state are quickly deemed the new high-water mark for surrounding states.

“I hear people talk and it’s not in a good way,” said Bill Tentinger, president-elect of the Iowa Pork Producers Association, who runs his family’s hog farm in Les Mars, Iowa, in south Sioux County. “People see these prices and think, ‘Well, if land in Iowa sells for $20,000 an acre, then why can’t my farm in Illinois or Minnesota or Nebraska sell for that much?'”

Locals here will tell you exactly why: rich soil, favorable weather trends, a high concentration of livestock and biofuel operations, and an intensely competitive farming culture.

Those are some of the reasons state records have been shattered time and again at local auction halls and barnyard gatherings. Sioux County bidders cracked $13,000 an acre for crop land two years ago. Last fall, the price tag on a farm field jumped to $16,750 an acre. In December: $18,250. Then: $20,000.

That run-up, warn economists, is fueling a potentially dangerous axiom in the minds of investors: that there is plenty of profit to mine from U.S. cropland, even if prices continue to reach once unimaginable highs.

“Not all dirt is the same. Some dirt is astonishing, compared to other dirt,” said Jim Rogers, the billionaire commodities investor and author. “But it ultimately comes down to economics: How much does that land cost, what crop can you grow on that land, what price you can get for that crop, and how much it costs you to produce that crop?”

Economists are hopeful there will not be a repeat of the boom-to-bust farm cycle in the late 1970s and early 1980s.

Farmers today do not appear to be borrowing heavily against their high-value land in order to fund new real estate purchases, economists said. Such leveraging was one of the key causes behind the last agricultural bust: grain surpluses depressed prices, farmland prices dropped by half and farmers were squeezed by deepening debt.

WHAT IS FARMLAND REALLY WORTH?

As word spreads of each heady price tag from public sales in Sioux County, auctioneers and real estate agents said the boom is quick to ripple outward. The latest spike was set off in early December, when farmer Leland Kaster paid $20,000 an acre for fields next to his dairy near Hull, Iowa, a Sioux County hamlet located about 50 miles southeast of Sioux Falls, S.D.

If Kaster were to grow corn on his new 73.4 acres, he’d be able pull in about $1,250 per acre in gross revenues next year, given futures market prices and average corn yield. More simply put: It would take the Kaster family more than half a generation to recoup their money – and that’s only if corn prices remain relatively high.

“We call it the Iowa Effect,” said Nebraska auctioneer Randy Ruhter. Land prices in eastern Nebraska, a state which saw a more than 40 percent jump in the third quarter, edged up another 3 to 5 percent after the deal.

Part of the reason that land values can be so easily influenced by a single auction in a small rural county is that calculating the value of a farm field is different than figuring out what people are willing to pay, say economists.

Land values can fluctuate wildly, depending on who is doing the math and what income and expense factors are used. The Federal Reserves’ Midwest farmland surveys come out quarterly. Researchers at land-grant universities regularly roll out their research, too.

And there are so many different elements to weigh – including human emotion and other hard-to-quantify factors – that nailing down a transparent answer that is universally accepted can be difficult.

“Each land sale is unique and each person will take their own set of assumptions into the calculation,” said Michael Duffy, an agricultural economist at Iowa State University.

That inconsistency is partly why investors and sellers alike have turned to public auctions to figure out what the market will bear.

PERFECT PLACE FOR A PERFECT STORM

In many ways, Northwest Iowa is unusually ideal for such a perfect investment storm.

The soil is rich. Weather patterns have shifted in recent decades, allowing the dirt to retain more water and improve crop yields in northwest Iowa. The county’s annual precipitation has averaged 30.44 inches in the past 30 years, up 13 percent from the previous three decades, according to state climatology officials.

Extreme summer heat has been less frequent. In Sioux City, for example, there were only seven days where the temperatures hit 100 degrees or higher in the past decade, down from 21 days in the 1980s.

Competition for land and grain is also intense. Sioux County has more farms – 1,664 – than any of the state’s other 98 counties, according to the USDA’s 2007 Census of Agriculture. It’s the state’s top seller of cattle and hogs, and the second largest seller of corn.

There are 13 ethanol plants, and two biodiesel factories, within a 90 minute drive of the county’s center, reducing transportation costs. Those plants compete for crops with the region’s scores of hog farmers, dairy producers and cattle feedlots, the engine that drives much of the county’s success.

Worries about Washington, and the growing regulatory influence of the U.S. Environmental Protection Agency in rural America, have livestock farmers here scrambling to buy more land to dispose of their animals’ manure. The EPA has already warned dairies in California over their failure to dispose of manure.

The growth of a larger local customer base has reshaped land values, too, according to data compiled by Iowa State University.

During the farmland boom of the 1970s, land prices were valued higher on the eastern side of the state, where farmers were physically closer to barge transportation on the Mississippi River.

Louisa County in southwest Iowa, which sits alongside the Mississippi, saw its farmland valued among the highest in the state during that period: It jump 355 percent during the 1970s, according to Iowa State University research.

Then, there’s the human factor. Auctioneers and real estate experts say the extreme high-priced deals are often driven by a regional culture of competitiveness, rather than economics.

Dutch immigrants flocked to Sioux County in the mid-to-late 1800s, in search of cheaper land to carry on their farming heritage. They brought with them a culture of faith and frugality that exists today, with farmers flush with cash and deep emotional roots to their land.

But they also carried with them an intense enmity between neighbors and outsiders. Such rivalries were so intense that, back in 1872, a fight over where to set up the county seat reportedly prompted farmers and townsfolk in Hull and Orange City to raid the log courthouse in Calliope, Iowa, and steal a safe with all the county property records in it. (The documents were later returned.)

“I’m hearing a lot of, ‘You were rude to me and by god I’m not going to let you have it.’ Or, ‘That was granddad’s land and I’m going to get it back’,” said Duffy, of Iowa State University.

Such was the case with the Kaster deal. The land he bought a month ago for $20,000 an acre does not look particularly dramatic: a field of tilled black soil where frost sparkles on clumps of dirt the size of bowling balls. But the auction price tag spiked when Kaster, who runs a relatively small dairy, faced off against a rival neighbor, who operates a much larger farm.

Kaster “told me at the break that he was going to get that land, no matter what,” said auctioneer Pete Pollema.

Despite the dangers of extrapolating Sioux County’s land values for outside guidance, and given that the federal ethanol subsidies quietly expired last year, some people still believe there is plenty of life left in the local boom.

That faith prompted town officials in Hull — home to nearly 2,200 people, eight churches and no stop lights — to join the land rush: The town’s economic development team bought a nearby 80 acre parcel two years ago for $1 million.

City administrator Les Van Roekel insists the deal was a savvy move. Area crop and dairy farmers clamored to cash-rent the land, after a local cheese plant recently announced plans to double the amount of milk it processes each day.

Recently, local real estate agents and auctioneers pegged its worth at nearly $19,000 an acre, Van Roekel said. Local leaders are shopping for more land, either to buy or trade.

“We’re somewhat in a bubble here,” Van Roekel said. “But I think we’re going to be fine.”