The Bull Case for Uranium

Posted by The Daily Reckoning - with Mark Leibovit comment 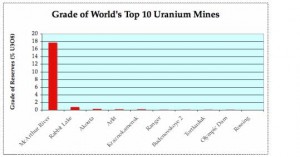 Today, Chris Mayer, editor of the Capital & Crisis newsletter, offers an update on a notably bullish case for uranium.

The spot price of uranium quadrupled from 2004 to 2007. When it hit $138/lb, uranium became a certified bubble, which has now burst.

Today, Chris Mayer, editor of the Capital & Crisis newsletter, offers an update on a notably bullish case for uranium. From Mayer’s research update:

“First, we are most interested in supply, as any investor in a natural resource should be. We like commodities hard to produce more of when demand rises. That implies that prices will rise quickly. And investors will make a lot of money.

“Uranium fits the bill. Most of the stuff — nearly 60% of it — comes from only 10 mines. Cameco’s MacArthur River mine alone is 15% of the world’s production. For comparison, Forest points out that the top 10 mines in the gold sector produce 19% of the world’s supply. In copper, the top 10 make up 30%. Uranium is a top-heavy field.

“Well, Cameco’s MacArthur mine is the world’s highest-grade mine — and it isn’t even close. Take a look at the next chart, from Dave Forest’s piece titled “Why Uranium Will Make Someone Rich” at Oilprice.com: “Rabbit Lake, by the way, is also a Cameco mine. Again, other mining sectors show a smoother curve as you move from left to right. But uranium is quirky.

“So what does this mean? Grades affect costs. High-grade mines are usually low-cost mines. What this means for the uranium industry is the cost curve is extremely steep. That is, as it tries to produce more uranium, the costs of the incremental uranium shoot up rapidly.

“The bull case for uranium is right here in this chart: On the vertical axis are uranium supply costs and on the horizontal axis is demand. The low-cost mines are in the $10-15 a pound range and all in Saskatchewan. Olympic Dam is highlighted because it is the exception. It is a BHP mine in Australia that produces copper and gold as well. These other metals lower the cost of extracting uranium, but it is not a pure uranium mine.

“As demand moves higher, you can see how the cost rapidly shoots up. In fact, the World Nuclear Association says that 2010 demand will come at 81,000 pounds. That puts us against the right-hand part of the curve.

Further, Mayer points out that it’s trading for only nine times next year’s cash flow, has a strong balance sheet, no net debt, and over $1 billion in cash. To learn his specific actionable recommendation on Cameco you have to visit the Agora Financial research page and sign up for Capital & Crisis.

Also, remember that Chris Mayer will be speaking at the Agora Financial Investment Symposium in Vancouver. You can register for the July event here.

Rocky Vega is a regular contributor to The Daily Reckoning. Previously, he was founding publisher of UrbanTurf and RFID Update, which he operated from Brazil, Chile, and Puerto Rico, and associate publisher of FierceFinance. He specialized in direct marketing at MBI, facilitated MIT Sloan School of Management programs, and has been featured on CBS. Vega graduated with honors from Harvard University, where he was on the board of Let’s Go Publications and directed business programs involving McKinsey, Goldman Sachs, and Harvard Business School faculty. He is also enrolled at the Stockholm School of Economics.

[Nothing in this post should be considered personalized investment advice. Agora Financial employees do not receive any type of compensation from companies covered. Investment decisions should be made in consultation with a financial advisor and only after reviewing relevant financial statements.]