The Buck Stops Where? 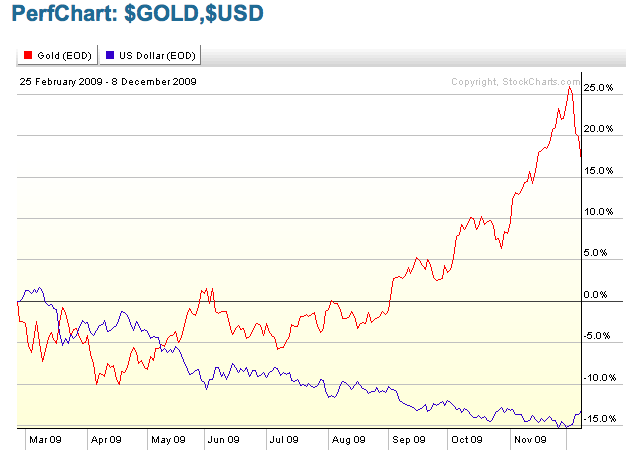 “Americans are in a distinctly foul mood these days” – “And who do I blame? I blame the Fed and its creation of “ever-more fiat money,” and I blame particularly Alan Greenspan and his professorial understudy, Ben. S. Bernanke, both of whom know better.” – Richard Russell 12/08/09

Last week, we witnessed Ben Bernanke’s Senate confirmation hearings for a second term as Fed Chairman. The air was thick with hypocrisy, as Senators vied with each other to cast blame on the Fed Chairman for the fiscal mistakes of the Congress. As an overtly politicized figure who has looked to bolster the poll numbers of successive Administrations, Bernanke certainly should shoulder a large share of the blame for steering the United States towards the brink of bankruptcy; however, he did not act alone. Ironically, many of his co-conspirators are currently his harshest critics.

The truth is that if there were no debt from Congressional deficit spending, there would be nothing for the Fed to ‘monetize’ with the printing press. By behaving as the voters’ ‘best friend,’ delivering both low taxes and generous entitlements, Congress forced the Fed to play the disciplinarian. Except, not wanting to spoil the party, it didn’t. Ben Bernanke, like his predecessor Alan Greenspan, is an intelligent man who knows exactly where reckless spending will lead the country. Yet he refused to hit the brakes.

When former President Nixon broke the last ties between the U.S. dollar and gold, he opened the floodgates to Congressional abuse. Before the ‘gold window’ was closed, if the federal government ran up too much debt, other countries would start trading their reserves for our gold. Afterward, these creditors were left in something of a pickle: they held huge dollar reserves (built up on the belief that it was ‘as good as gold’) which now had a value dependent on being able to trade with Americans. This translated into a huge subsidy for America – quickly eaten up by a guns-and-butter spending philosophy directed by Congress.

Moreover, in an effort to sell an ‘American dream’ based on homeownership, Congress subsidized and guaranteed residential mortgages through Fannie Mae, Freddie Mac, and the FHA. This created a perfect speculative play for the combined investment/commercial bank behemoths emerging from the ashes of Glass-Steagall.

These major transgressions of government lie at the heart of the economic decline and financial crisis that now face America. They were the direct fault of Congress, not the Fed.

The main charge against the Fed is that it has ignored its vital independence. This began under the stewardship of Chairman Alan Greenspan and continued under his protégé, Ben Bernanke. Both Greenspan and Bernanke could fairly be labeled as ‘inflationists,’ in that they favor inflation over recession.

Thanks to Nixon, the Fed can create paper money out of thin air by means of book entries in the accounts of Fed member banks. Over the turn of the century, Greenspan, assisted by Bernanke, used this power to finance the greatest asset boom in world history. Today, Bernanke is financing a second great financial inflation, but this time in the face of an economic recession. This will fuel the worst of all worlds: massive stagflation.

Already, total American government debt, including off-balance sheet IOU’s to the Social Security Administration, stands at between $56 and $110 trillion. Based on a gross domestic product of some $13 trillion, it is most unlikely that the debt will be repaid. Increasingly, it is being described as the biggest Ponzi scheme in history. This Rake’s Progress is not lost on the markets. The U.S. dollar has declined precipitously, both in terms of gold and against foreign currencies, sapping the confidence vital for an economic recovery.

Regardless of who is to blame, Bernanke faces a decision. He may either continue to debase the currency or raise interest rates, likely forcing the Treasury into default. The latter may sound like a political impossibility, but consider carefully the alternative. In our present situation, many countries throughout history have simply revalued their currencies, wiping out a huge chunk of their debt, and started again. But the U.S. dollar has no fixed value, except the external fix of China’s currency peg. Since China is our largest creditor, they could theoretically revalue our currency by adjusting the peg. This would have a tremendous impact on the American economy, and we don’t get a vote!

The Fed did not create this crisis, but it did abdicate its responsibility to stop it. In doing so, it has essentially exported our major monetary powers to China. We’re partying in a house that China owns. If we don’t keep ourselves under control, they will wake up and impose some harsh discipline.

As they say, forewarned is forearmed, making gold possibly more attractive than even its present price indicates. John Browne is the Senior Market Strategist for Euro Pacific Capital, Inc. Mr. Browne is a distinguished former member of Britain’s Parliament who served on the Treasury Select Committee, as Chairman of the Conservative Small Business Committee, and as a close associate of then-Prime Minister Margaret Thatcher. Among his many notable assignments, John served as a principal advisor to Mrs. Thatcher’s government on issues related to the Soviet Union, and was the first to convince Thatcher of the growing stature of then Agriculture Minister Mikhail Gorbachev. As a partial result of Browne’s advocacy, Thatcher famously pronounced that Gorbachev was a man the West “could do business with.” A graduate of the Royal Military Academy Sandhurst, Britain’s version of West Point and retired British army major, John served as a pilot, parachutist, and communications specialist in the elite Grenadiers of the Royal Guard.

In addition to careers in British politics and the military, John has a significant background, spanning some 37 years, in finance and business. After graduating from the Harvard Business School, John joined the New York firm of Morgan Stanley & Co as an investment banker. He has also worked with such firms as Barclays Bank and Citigroup. During his career he has served on the boards of numerous banks and international corporations, with a special interest in venture capital. He is a frequent guest on CNBC’s Kudlow & Co. and a former contributing editor and columnist of NewsMax Media’s Financial Intelligence Report and Moneynews.com. He holds FINRA series 7 license.

Founded in 1980 and headquartered in Westport, Connecticut, Euro Pacific is a full service, FINRA-registered broker/dealer that has historically been recognized for its expertise in foreign markets and securities. Through its direct relationships with countless foreign trading desks, the firm’s clients are able to avoid the large spreads often imposed by domestic market makers of foreign securities, thereby substantially reducing overall transaction costs. See The Euro Pacific Advantage

Though we offer access to all U.S. stocks and bonds, and are certainly knowledgeable in domestic investments, we specialize in international securities. By trading foreign stocks and bonds through Euro Pacific Capital, individual investors can benefit from our extensive experience in this highly specialized area. Euro Pacific Capital’s clients gain access to foreign markets which are out of reach for most individual investors trading through traditional brokerage firms. With Euro Pacific’s guidance, buying foreign stocks and bonds, and building a truly global portfolio, has never been easier. Let us put our experience to work for you.

Euro Pacific Capital does not engage in any market making activities, thus the firm’s individual and corporate clients can be assured that any recommendations given are free from the various conflicts of interest so prevalent among Wall Street brokerage firms.

Peter Schiff, the firm’s president, and a renowned pioneer in the field of international investing for individual investors, leads a team of investment professionals and support staff dedicated to the highest levels of customer service, a team literally searching the world over for valuable investment opportunities.