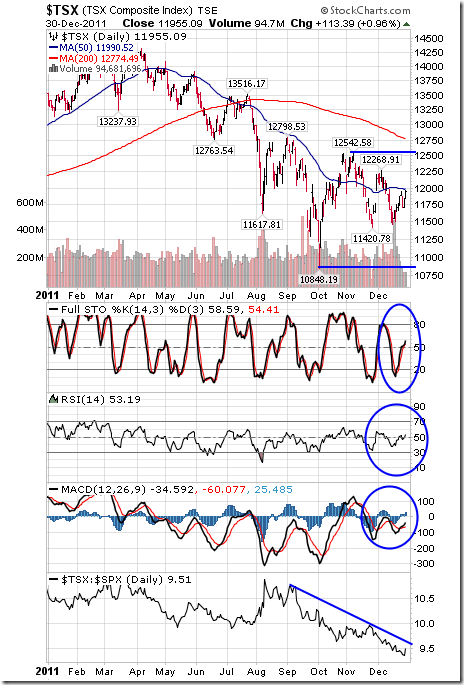 The S&P 500 Index eased 7.73 points (0.61%) last week, but was unchanged in 2011. Intermediate trend is neutral. Support is at 1,158.66 and resistance is at 1,292.66. The Index trades above its 50 day moving average, but slipped below its 200 day moving average on Friday. Short term momentum indicators are overbought and are showing early signs of peaking. Crude Oil slipped $0.60 (0.60%) last week. Intermediate trend is up. Support is at $92.52 and resistance is at $103.37. Crude completed a “Golden Cross” last week. Short term momentum indicators are overbought and showing early signs of rolling over. Seasonality turns positive in February. Gold fell $44.70 (2.78%) last week and briefly broke support at $1,535.00. Nice bounce late on Thursday and continuing on Friday! Short term momentum indicators are oversold and may be showing early signs of bottoming. Strength relative to the S&P 500 Index remains negative. …go HERE to Don’s Tech Talk site for the 40+ more charts to view as well as other interesting articles posted today.