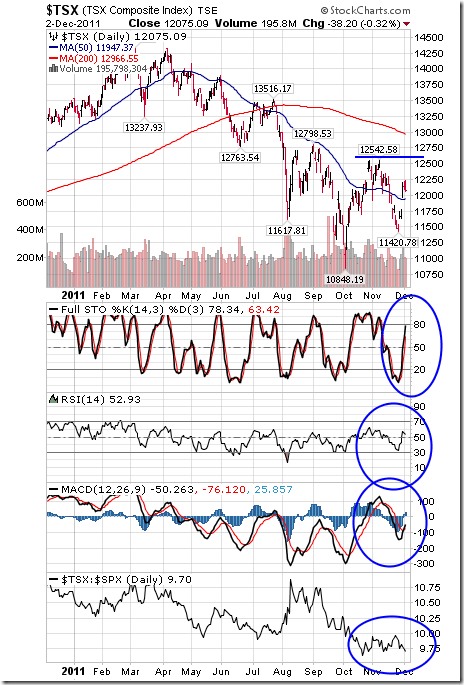 Technical, fundamental and seasonal influences point to another volatile period for equity markets around the world this week. An optimal opportunity to enter/add to positions appeared early last week. Preferred strategy has changed to buy/accumulate economically sensitive sectors on weakness (particularly sectors that benefit from seasonal influences).

The TSX Composite Index gained 613.04 points (5.35%) last week. Intermediate trend is down. Resistance is at 12,542.58. The Index moved above its 50 day moving average. Short term momentum indicators are recovering from oversold levels. Stochastics already are overbought, but have yet to show signs of peaking. Strength relative to the S&P 500 Index has turned from positive to neutral mainly because of strength in the Canadian Dollar relative to the U.S. Dollar. Gold added $65.10 per ounce (3.87%) last week in response to weakness in the U.S. Dollar. It moved above its 50 day moving average. Resistance is at 1,804.40. Short term momentum indicators are recovering from oversold levels. The U.S. Dollar slipped 1.07 last week. Intermediate trend is up. Resistance is at 79.84. The Dollar remains above its 50 and 200 day moving averages. Short term momentum indicators are overbought and have started to roll over. The yield on 10 year Treasuries increased 7.5 basis points last week. The “flight to quality” trade is reversing. In addition, a switch from fixed income securities into equities has become evident. Yield moved above its 50 day moving average. Short term momentum indicators are recovering