Stocks Bonds Gold US Dollar….thoughts on the sell off 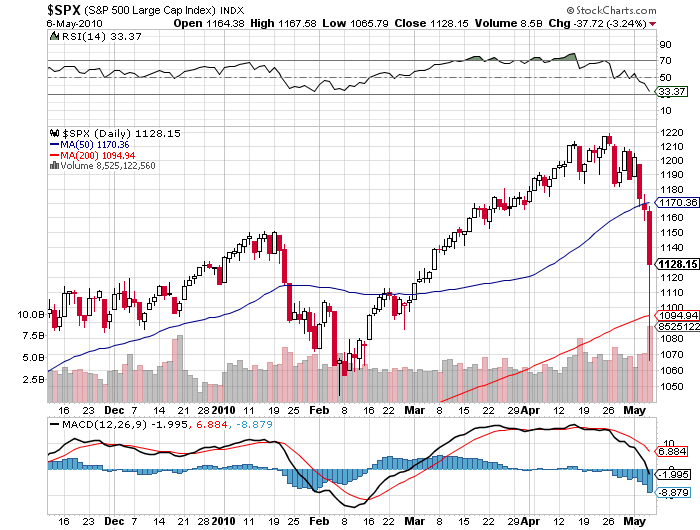 One of the greatest gentlemen I ever met was market forecaster Kennedy Gammage. He was known for his many sayings, one of which is most appropriate for the start of my update:

“Those of us who make a living looking into a crystal ball will end up learning how to eat lots of broken glass.”

Days like today do a lot more than cause great volatility. They also bring a reality to some but often end up overlooked or purposely ignored by many. Its days like today when investors/speculators/gamblers get to see what they really are made of (or the lack thereof). What they “thought” their financial and mental anguish tolerance levels were and what they suddenly realize they really are, end up two very different things.

For years I’ve spoken about how we’re all really gambling but Wall Street purposely avoids implying that with words like “speculating” and such. Gamblers must be prepared to lose part or all their capital but investors/speculators end up on days like today realizing they’re truly not prepared for the downside of investing/speculating/gambling. For a small minority, today and days like today end up being a watershed event, and they finally shed themselves from the myths and mistruths Wall Street has embedded in their heads and ultimately approach their finances in a proper manner. For these fortunate souls, today’s action makes it all worthwhile.

U.S. Stock Market – Erroneous trades, Greece, the U.S. Dollar, LT arrested, Jupiter crossed Saturn, Mr. T. lost his gold.. whatever the number of reasons end up being “assumed” as the reason or reasons for the sell-off, the only thing soothsayers like me are suppose to do is predict what’s going to happen next. Some may not like my answer but it’s 100% factual – I’ve nothing close to certainty or even a very reasonable guess. Hmmm…. How can that be you say? Given the numerous fundamental and technical factors and the fact the daily playing field is very tilted against little players like me and most who are reading this, it would be more of an act for me to state with any real degree of certainty and/or expectation what may or may not happen.

Now, if you’re willing to except a total “guess,” please read on.

After months of straight up with little or no real corrections, one could argue at the very least a 10% or so correction from the recent highs is healthy. Knowing Wall Street thrives on the “Don’t Worry, Be Happy” approach, I fully expect the many spokespeople of financial institutions to take their usual stance of “it’s a buying opportunity.” Let’s not forget that you could toss these folks off the top of the Empire State Building and all the way down they all would say the same thing – “So far so good!”

The bearish argument, one that has drawn many lines in the sand from the bottom in March 2009, only to see the bulls run rampart over them, will certainly be jumping up and down saying this one is the real McCoy and to run, not walk (if you still have any legs following them the last year or so) to the nearest exit.

Given what took place today and tomorrow’s monthly employment exercise, I think any hard decisions should wait until at least this weekend. There’s no position one could possibly be in that can’t endure one more day, if not several days as big swings should be the rule until further notice.

I don’t think much has changed in the scenario I’ve painted for over a year as I still am looking for the ultimate market peak not before June/July at the earliest. Gold – I guess my $1,200 before $1,000 bet can now be officially considered passed on-lol. Like the stock market, gold is going to be very volatile for at least tomorrow. A stock market rally could bring on a $20-$40 decline. Further equity market weakness and we can make a new nominal high. Either way, my long term target of $1,300 – $1,500 has never looked better. U.S. Dollar – If there’s one market that could see severe profit-taking tomorrow, especially if it opens up nicely higher, it is the U.S. Dollar. The bear market rally should continue after any profit-taking. Oil – For traders/gamblers only (that leaves 95% of you out whether you like it or not), going long oil around $75 if it sells off to that level is interesting. Bonds – If anything good came out of this it’s the opportunity to sell bonds –again. I pray if anything comes out of days like today it’s that people realize:

“Do not store up for yourselves treasures on earth, where moth and rust destroy, and where thieves break in and steal. But store up for yourselves treasures in heaven, where moth and rust do not destroy, and where thieves do not break in and steal. For where your treasure is, there your heart will be also.” Matthew 6:19-21