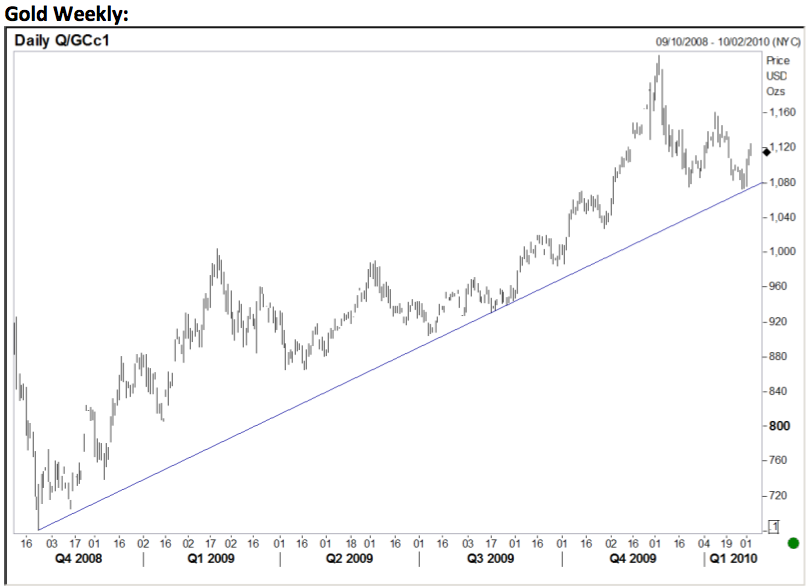 Quotable
“I refuse to join any club that would have me as a member.” – Groucho Marx

FX Trading –  The Gold Club (or religion of gold)

My father in law wrote yesterday to give me grief about my recent gold forecast/guess as laid out in a recent Currency Currents.  So happy he was with the recent bounce off the support level in the yellow metal (see weekly gold chart below). I’m used to the well-deserved harangues from him.  But I think he is way too complacent about his position.  I have concluded that most who like gold do not like it for its investment quality—it is pure and simple a religion.  Thus, negative talk about one’s religion cannot be tolerated.

Nothing seems to deter gold believers.  I expect my father in law will ride it all the way down.  (Okay, I know what you’re thinking, gold has already put in a big correction, down from its high; it can’t go much lower is the complacent consensus complaint when we say that.) I am not talking about the corrective-move type of stuff; I’m talking about the type of hit gold takes when the US dollar enters a multi-year bull market.

In the chart below, gold is represented by the red line and the US$ index the black line.  This slide is a bit old…and was done just before gold broke out and surged to its new high on the back drop of plenty of liquidity flowing back into the market, pushing all other risky asset higher i.e. liquidity-driven risk asset classes—gold is now a risk appetite asset given the way it is acting.  It is not acting as a safe haven.

Jack Crooks was a speaker at the World Outlook Financial Conference January 22,33

Register HERE for the FREE Daily Currency Currents Newsletter.As a subscriber to Currency Currents you stay tuned-in to our current global-macro view and our analysis of key investment themes driving currency prices. Nothing is off limits to us in this free-wheeling look at the markets. Some days you’ll receive ramblings on trading psychology, while other days we may take an academic approach in explaining esoteric economic issues. Ultimately we have one goal in mind: to help you get a handle on the key investment themes driving global capital flow. Because if you know where the money is going, it increases the probability that yourposition in the market will be a profitable one.