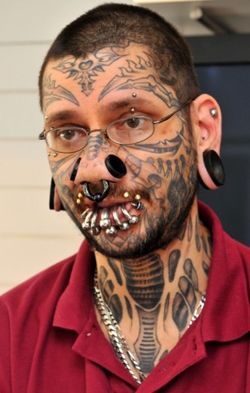 Getting a tattoo from this guy? Better question, who could possibly fall asleep getting tattoos from our friend above?

GIRL HAS 56 STARS TATTOOED ON FACE

Eighteen-year-old Kimberley Vlaminck went to a local parlor called The Tattoo Box, and was given to Romanian tattoo artist Rouslan Toumaniantz. Vlaminck claims that she only asked for three stars to be tattooed on her face. She has stated that he only spoke broken English and French but tried to be clear as possible about what she wanted.

Vlaminck says she then fell asleep during the procedure and awoke to instead find 56 stars across the left side of her face! She is now suing him for $14,000, the cost of the laser surgery she will need to remove the tattoos.

However, Toumaniantz is fighting back, saying that he gave her exactly what she wanted. “She was awake and looked into the mirror several times as the procedure was taking place. The trouble all started when she went home and her father and boyfriend threw a fit.”

Her story does raise a number of questions. Why did she pay and leave the tattoo parlour without complaining? Why was it not a problem until she arrived at home?

And most confusingly, who is capable of falling asleep while a very tender part of their body is being tattooed?

Really do you believe her?
Yes! – She is obviously a victim
No – Just Darwin\’s law in effect