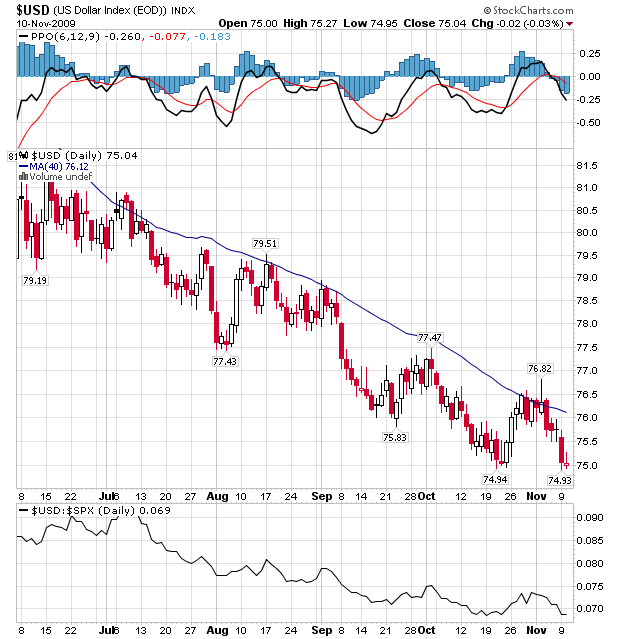 I have been told the feedback from “The MoneyTalks Allstar Trading Super Summit” in Vancouver on October 24 was excellent and my presentation very popular.

A the video of the conference is now available for purchase. A special promotion code has been created for VRtrader.com clients. Using this code you can get a 50% discount on the $117 price. The StockScores promotion code is – S2009ML

Folks just go to www.moneytalks.net , Click on the Banner box titled “The MoneyTalks Allstar Trading Super Summit Video“. This will take them to the shopping cart where the process is pretty straightforward.

Early dollar strength weighed on pre-market futures, but once the opening bell sounded, the dollar retreated while equities strengthened. Neither traded with conviction, however, so we ended up with a lower volume consolidation day. Semiconductors (SMH +0.83%) had another solid day, but on weaker volume. Gold miners (GDX +0.77%) also had a good day as GDX fought off early selling efforts to close near its high.

The market also sent mixed signals on risk today which is common on consolidation days. The above mentioned outperformance by semiconductors along with consumer discretionary stocks (XLY +0.35%) outperforming consumer staple stocks (XLP -0.04%) was a plus. A very weak performance by small caps (-0.94%) was a big negative.

The Russell 2000 retreated meekly from its 50 day moving average which is not good news for the bulls. That is the index to keep an eye on right now. Over the last few weeks, we have the Dow leading the way while the Nasdaq Composite is lagging, but the Russell is lagging even worse. Again, this dynamic along with tepid volume is not a recipe for sustainable gains.

The Dow Industrials continues to be the only index to post new bull market highs when it touched 10,260.80 intra-day yesterday. That’s two days of negative divergence. I am still on my TIMER DIGEST ‘Sell’ signal from mid-October, so though I caught a portion of a 5.5% correction, I was not clever enough to flip to the long side. My intermediate work into next year is bullish, so I will be looking to get back ‘on track’ with a TIMER DIGEST ‘Buy Signal’ when I’m comfortable doing so. Indeed, despite the fireworks of the past several sessions, the market could still have created a bull trap for the short-term horizon.

Today is ‘Weird Wally Wednesday’. Weird Wally is most likely caused by the fact that most futures have “rollover” dates on the Wednesday/Thursday the week before expiration. The quarterly Weird Wallies (March, June, September, December) will see more volatility since many futures are quarterly (such as the widely traded S&P e-mini) and not monthly. Weird Wally is not really an options phenomenon, but it does affect options and options traders because many futures traders hedge with options and will close those options positions when they rollover/close their futures positions.

Mark was named the #1 Gold Timer for the one-year period ending March 25, 2008 by TIMER DIGEST.
The weekly VR Gold Letter focuses on Gold and Gold shares. The letter is available to Platinum subscribers for only an additional $50 per month and to Silver subscribers for only $70 per month. Email me at mark.vrtrader@gmail.com.