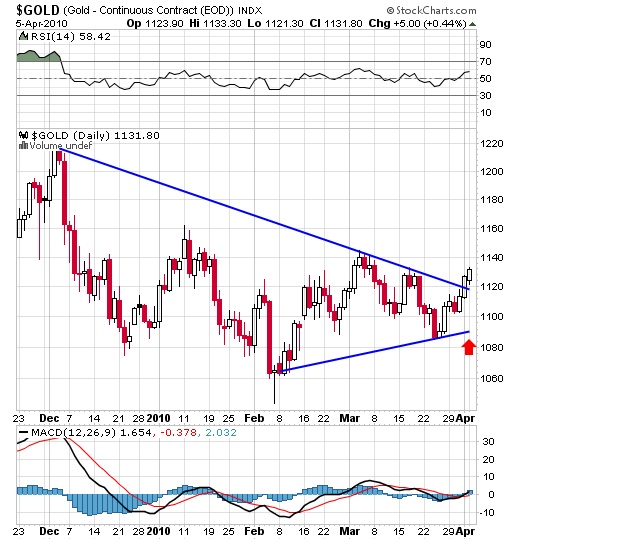 U.S. Stock Market – My long standing belief we shall see DJIA 11,000+ is upon us. Any weakness in the market is likely to be short-lived as the “Don’t Worry, Be Happy” crowd knows how much they can milk such a feat.

As you know, I continue to look for economic growth at least through June/July and that should put a floor under any stock market correction. The “fantasy” in all this is to see several more hundred points added on into summer and then put on my growling bear suit again (which by then may may need to be taken in a little please God).

U.S. Interest Rates – Going substantially higher over time. I continue to suggest avoidance of any bond maturities over two years.

Gold and Silver – Going substantially higher over time (where have we heard that before?). Love them! U.S. Dollar – The feeble countertrend rally continues and my target remains 83-84 on the U.S. Dollar Index. Anyone notice the Loonie at parity? From below 80, I’ve said it’s by far my favorite currency. Now will the Canucks have me eating crow this summer? Stay tuned.

Oil and Gas – At $90+, oil could become a tempting short but for now I remain on the sidelines. Natural gas could see below $3 this summer so continue to avoid.

Fingers and toes crossed that Northern Dynasty Minerals *can finally make the $10 area a bottom versus a top. No news is good news on Continental Minerals*. Why? Because IMHO if there weren’t anybody knocking on their door, it would be in their best interest to do all they could to promote the further development of KMK. The fact HD remains deadly silent is to me good enough for my belief KMK is a takeover target.

After being in the doghouse, Nevsun has come roaring back and could make a new 52-week high in this move. Evolving Gold has put in a major bottom in my highly biased opinion. Stay tuned. East Asia Minerals appears to be on automatic pilot and is a prime takeover target. Be a strong holder.

*Were originally model portfolio selections but became clients of mine afterwards.

I had a lengthy discussion with Scott Cousens of Heatherdale Resources yesterday and he remains very optimistic on the company’s future. He believes the market read much too much into the last few drill holes and reminded me that we’re only in the first or second inning of a nine inning game. I think the current price gives those not yet shareholders a chance I honestly thought would never present itself again. To me, I wouldn’t look a gift horse in the mouth but I’m highly biased here.

Silver Quest Resources is consolidating after more than doubling in price on big volume. The Hard Rock Analyst came out with a write-up this morning on the company. In my mind, HRA is the #1 newsletter for junior resource companies. I continue to wait for data from Spanish Mountain Gold before doing a write-up. Sunridge Gold had great news recently and in my heart of hearts would be much higher if not for where it’s located. I believe it won’t end up mattering if results continue to be so good. Taseko Mines is firing on all cylinders and I highly anticipate new 52- week highs shortly. Finally, Timmins Gold is cheaper now relative to where it is on the corporate development ladder than any time since I first became involved with it.