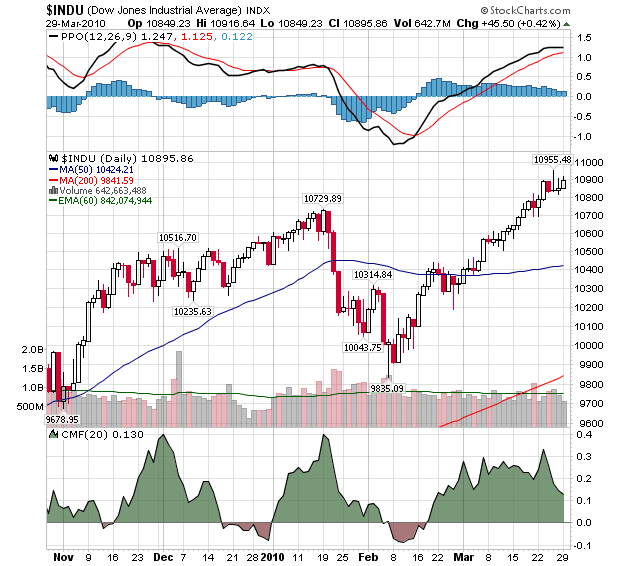 Please Note – Our offices will be closed from April 1st to April 12th and blog posts will be very limited.

U.S. Stock Market – DJIA 11,000 – ALL ABOARD! Its been my contention that we shall break above 11,000 on the DJIA in order to create the media frenzy of “happy days are here again” and for the shorts to finally throw in the towel. I’ve stated for over a year that my economic model was pointing to a peak in the June/July 2010 time frame and not to expect the stock market to truly top out before that. I continue to look for this occurrence. U.S. Bonds – A massive head and shoulders pattern has formed and strongly suggests when the neckline is broken to the upside, interest rates are going to head much, much higher. It’s critical to appreciate that after almost a 30-year bull market in bonds the bear market unfolding is not going to be just a matter of months. Gold – What can I say that I haven’t said already? Despite the almost daily onslaughts of some advisers saying gold is in a bubble, ready to tumble, nothing but a relic and blah, blah, blah, gold has once again weathered another assault despite a dramatically shrinking base of ardent bulls like yours truly, Bill Murphy and Jim Sinclair. The perma-bears would suggest we should be called the three stooges. Me? I fancy the three musketeers!

We remain in a secular bull market that is turning  a ceiling of a four-digit price into a floor. The eventual top from this process will be many hundreds, if not a thousand or more dollars from this floor. The road will remain rocky as gold is the #1 hated investment by the vast majority of people in and around the financial arena. You’re never going to wake up and find the masses proclaiming its virtues. In fact, the day you wake up and the “Senior Analyst” actually likes gold, run, don’t walk to sell. But, for now continue to use him and other perma-bears as the ultimate contrary indicators.

US Dollar – The countertrend rally continues and my target of 83-84 is still intact. This is by no means the dawn of a new bull market but a  necessary and welcomed occurrence in the secular bear market the dollar remains in.

The U.S. stock market would like you to believe this is our future: But sadly, after this summer, reality should begin to set in and many Americans shall realize (like many do now around the world) we are really this: