Special Report: The Case for Commodities, Credit and Canucks 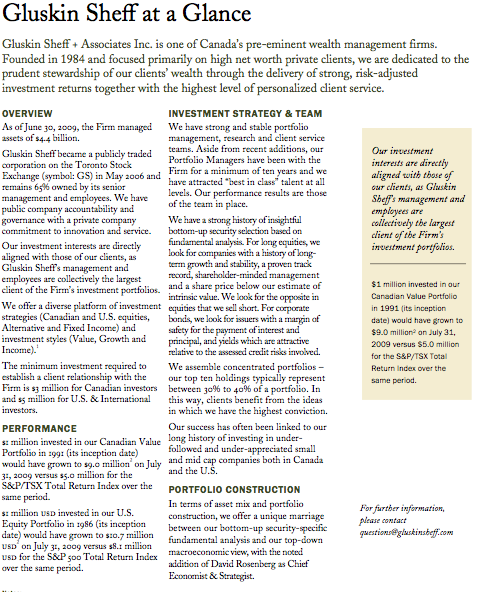 TWO OUT OF THREE AIN’T BAD

Now to be fair, while I was never bullish enough at the lows, I never advised clients to stay in cash either. There is more than one way to skin a cat, and frankly, even at the lows I never did consider equities to possess greater return potential than corporate bonds, which were priced for a much worse economic outcome (and that remains the case today, though the gap has narrowed). There was more than one report I wrote on this file in my last few months at Merrill Lynch, and several thereafter at my new digs, though the portfolio managers at Gluskin Sheff were on top of this story long before I came on board and our clients have been served well by this income-oriented strategy, especially for the comparable risks involved.

In fact, looking at the U.S. data, investment-grade credit — not junk, but good quality credits — have actually moderately out-returned the equity market so far this year. We doubt that is a factoid that you will hear on Fast Money!

And, I also published a series of positive commentaries on the outlook for commodities, and indeed, the CRB index, so far in 2009, is up more than 20% and the Goldman Sachs Commodity Index has rallied 30% — both outpacing the S&P 500.

So, I did miss the magnitude of the equity bull-run, but as Meatloaf said, “two out of three ain’t bad.”

BULL MARKET IN COMMODITIES = CANADA TO OUTPERFORM THE U.S.

We believe that commodities are in a secular bull market, and this is where Canadian outperformance relative to the United States comes into play — nearly 45% of the TSX composite index is in resources; almost triple the share in the U.S. Almost 60% of Canada’s exports are linked to the commodity sector, roughly double the U.S. exposure. This explains how it is that the Canadian equity market has managed to outperform the S&P 500 this year by a cool 2,000 basis points (in this sense, Canada is basically a low-beta way to play the emerging markets via commodity exposure).