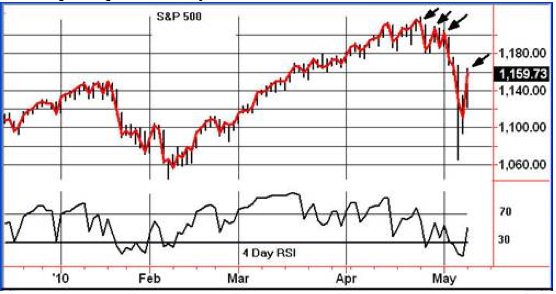 Today, the S&P 500 futures opened up over 4% for only the seventh time in history. The other times were 10/20/87, 10/21/87, 1027/87, 9/19/08, 10/13/08 and 10/28/08. In all cases, the gains were given back, most within a few days. One took almost two months.
Let’s take the three most recent. The events of Sept. 19 and October 13 were triggered by the announcement of big rescue packages for financial institutions. There was no special news for the big open on October 28.
Today, the news was a big rescue package to get European banks off the hook. Sound familiar?
When four day RSI becomes oversold and then we get a sharp rebound we look at the possibility of moving back to a short term buy signal if we have been bearish. But there are two problems. First, we still have a pattern of declining tops on the daily charts and volume was pretty anemic. Meaningful moves tend to be on impressive volume. Incidentally, the moves from September and October of 2008 weren’t on great volume either.
We can see that the declining tops are still in place in the chart below so we’ll see how things go over the next couple of days before considering a change in short term posture. The dollar was down, but well off the lows. It seems to have aided silver, copper and crude oil to a gain. Gold was down because of the sharp gains of the last couple of days. Bonds managed a sharp down session.
.
BOTTOM LINE:

Since 1984, the editor and publisher of the Todd Market Forecast, a monthly newsletter with emphasis on the stock market, but also with sections about gold, oil, currencies and bonds.

Steve spent a number of years as an engineer in a steel mill before becoming a stock broker with a number of Firms, including E.F. Hutton, Bache and Paine Webber.

He has published articles on the economy and the stock market in the following publications: Barron’s, Stock Market Magazine, Futures Magazine, The National Educator and others.