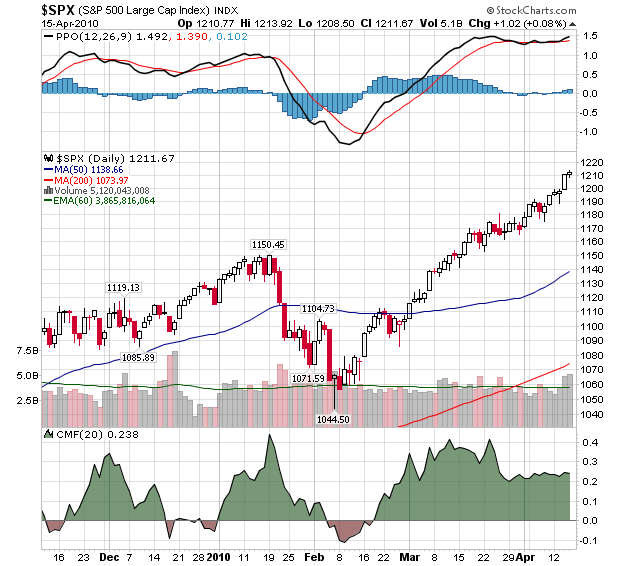 Mark has “not flashed a TIMER DIGEST ‘Sell’ signal, but it’s awfully tempting”.

Ed Note: The timing is good to take a trial subscription ( CLICK HERE) to be in position when the signal comes.

Thursday was a very interesting day. It was tax day in the U.S. and despite that the Dow Transports exploded again to new highs and other indexes rallied in sympathy, ‘teapartyers’ were out there in mass demonstrating against a “gangster government”, European airflights were grounded due to volcanic dust out of Iceland, Senator McCain called for quick military action against Iran, Barrack Hussein Obama is leaning towards ‘Appeasement’ with regard to the Middle East which is threatening Israel’s right to exist, and traders were eyeing today’s options expiration and deciding to either run for cover or join the party (not the tea party).

VRtrader.com Platinum subscribers, except for one position, are essentially in cash this morning. I have not flashed a TIMER DIGEST ‘Sell’ signal, but it’s awfully tempting considering how far the market has gone, how close it is to my pre-published targets for the S&P 500 and Dow Industrials, and the fact we’re fast approaching the critical May ‘change point’ timeframe. At the same time, we’re still in an uptrend and I’m still inclined to buy the dips while keeping my foot in the door just in case. I would look for a 100 point decline here in the Dow Industrials and take it from there before we, hopefully, resume higher.

I would encourage you not to chase the market here and at least wait for a retracement The other risk is that a correction once it begins could get nasty.

Take a look at the relationship with the very basic 50 day moving average and the S&P 500. Though it is rising it currently stands are around 1138 and the S&P 500 closed yesterday at 1211.65. That’s quite a distance should price meet the moving average – sometimes referred to as ‘reverting to the mean’. Today is options expiration and at the moment it appears it is going to open on a sour note as GOOD and ISRG are apparently gapping down in the morning. How the day will end is anyone’s guess.

Looking back, stocks rose for the sixth consecutive day, setting more bull market highs on the way, after a stronger earnings forecast from UPS and improved reports on manufacturing raised expectations for the economy. The Standard & Poor’s 500 Index increased 1.02 or 0.08 percent to 1,211.67 and is poised for a seventh straight weekly advance, its longest weekly winning streak since 2007. The Dow Jones Industrial Average rose 21.46 points, or 0.19 percent, to 11,144.57, trading at a new bull market high of 11,154.55. The NASDAQ outperformed, rallying 10.83 or 0.43% to close at 2515.69, hitting a bull market high of 2517.82 yesterday.

Healthcare stocks fell yet again (XLF -0.28%) and is the worst performing sector since healthcare reform was passed by Congress and signed by the President.

Special offer from Mark Leibovit for Money Talks only: The intense analysis of Gold in the  10-12 page The VR Gold Letter is right now 75% off for the first month or $29.95 (regularly $125.00 a month). The weekly VR Gold Letter focuses on Gold and Gold shares.Go HERE and use the Money Talks promo code CBC12210