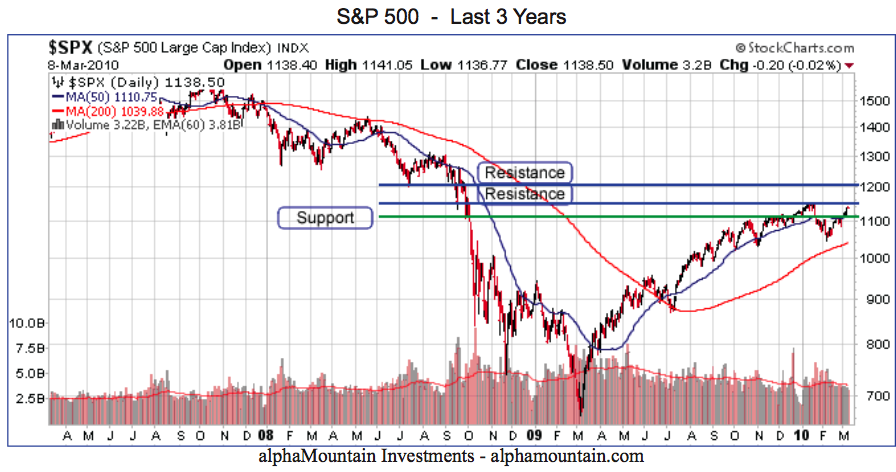 After a negative January in which pessimistic economic reports brought down the stock market indexes, February bounced back with better than expected company earnings and an increase in economic growth. Towards the end of the month some negative economic reports hit the markets, but they were easily “digested” and the market continued its upwards ascent. As of March 1st, S&P 500 earnings were up 154% from a year ago, an average of 5.5% better than analysts had expected. Despite the weak economy, revenue for the S&P 500 rose 9.5%. Analysts had expected an increase of 8.2% (Business Week, March 1st).

The economy is showing signs of recovery as the U.S. fourth quarter GDP growth was revised upwards from 5.7% to 5.9%. Although this is a strong number investors should remember that large numbers can be a result of comparisons to poor past performance. In addition a lot of analysts did not get too excited about the level of growth as 3.9% of the growth was “inventory driven.” In addition, expectations for the future were tempered with a report from the Commerce Department stating that new-home sales dropped 11.2% since December, a report from the Conference Board that reported that consumer conﬁdence had dropped to its lowest level since 1983, and a report that jobless claims shot up 22,000 when they were expected to decline by 20,000 (Washington Post February 28, 2010).

Despite the month ending with negative economic reports February still made solid gains in the stock market as the S&P 500 produced a gain of 2.9% and the TSX Composite a gain of 4.8%. So far the beginning of March has been started off strong and the month is expected to remain in positive territory. Since 1950 the S&P 500 has been positive 65% in March, which is typically one of the better months of the year.

Currently, the market has broken through resistance at the 1100 which now should provide support. We are now bumping up against the resistance that was developed at the beginning of the year. Although the market is having trouble breaching this point, given the strength of the recent earnings numbers and economic reports it will probably advance. The next level of resistance is at the 1200 mark.

Last month I stated that the market was due for bounce and it bounced from a bottom in early February. March will probably produce more volatility but the seasonal odds are that it will end in positive territory once again.