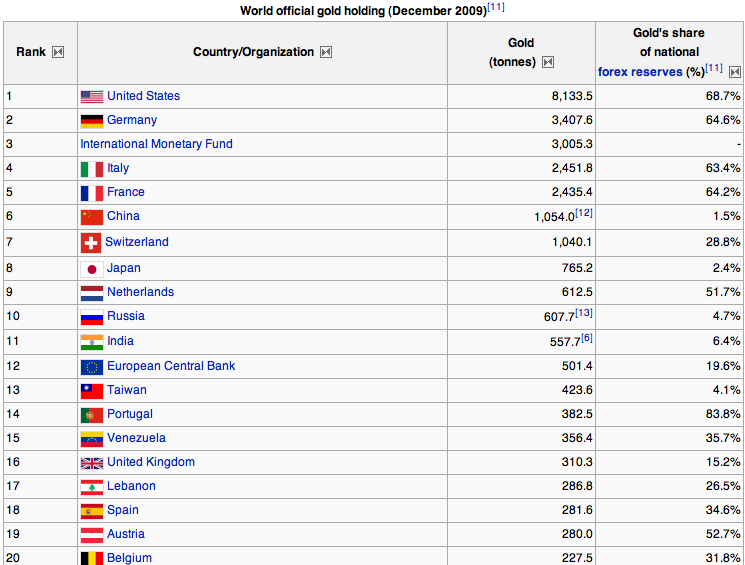 The Russian central bank will spend $1bn next week, buying 30 metric tons of gold from Gokhran, the state repository. Gokhran had planned to sell 20-50 MT on the open market, but cancelled after news of the sale leaked. The sale would have helped plug Russia’s budget deficit, and, apparently, purchase some diamonds from state-run miner Alrosa….

Does this not strike you as being odd?

In case you missed it, Russia announced that they are selling gold to THEMSELVES!?!?

The source of the gold data table appended below is the World Gold Council. It states that Russia possesses 607 [actually, now officially 640 tonnes with the addition of the recent 30-ish tonne purchase from itself] metric tonnes of gold bullion.

The revelation that Russia is “selling gold to itself” and lack of acknowledgment that Gokhran exists – is a MAJOR omission by the World Gold Council in their aggregate gold bullion data.

(Ed Note: go HERE and scroll down for a larger image of the World Official Gold Holding December 2009) ++Additionally, the World Gold Council also reports that as of October 2009, gold exchange-traded funds held 1,750 tonnes of gold for private and institutional investors.

GFMS is the world’s foremost precious metals consultancy, specializing in research into the global gold, silver, platinum and palladium markets.

GFMS is based in London, UK, but has representation in Australia, India, China, Germany, France, Spain and Russia, and a vast range of contacts and associates across the world.

Executive Chairman Philip Klapwijk and CEO Paul Walker appear regularly at international conferences and seminars, and their articles have been widely published. All analysts travel regularly and extensively to stay in touch with GFMS’ unrivalled network of contacts and sources of information around the world.

With 15 full-time analysts, two consultants and “representation” in Russia – how is that GFMS [and by extension the World Gold Council] can omit such a large hoard as stored at Gokhran and materially misreport the nature of Russian gold reserves? They didn’t even mention the existence of Gokhran in a footnote.

Gold professionals who have been inside Gokhran [Russian] State bullion depositories have provided me with personal accounts of this bullion depository. They report scenes reminiscent of the movie Gold Finger – on steroids – literally countless metric tonnes of neatly stacked gold bullion.

So, a better question might be, what else – regarding GOLD – has GFMS and the World Gold Council not reported or omitted?

It is generally accepted that for the entirety of mankind’s existence on this planet – the earth’s crust has yielded roughly 160 thousand metric tonnes of gold. The World Gold Council / GFMS identifies where roughly 32 thousand tonnes of that total are located.

We might add to what’s listed above, the following:

“No one knows exactly how much gold has been passed from generation to generation and is now stashed in safe deposit boxes across India. But bullion analysts estimate Indian families are sitting on about 15,000 tonnes of gold worth more than $US550 billion ($A600 billion).”

Then, if we conservatively assume that the rest of the world has as much as India stored away in safe deposit boxes – that’s another 15,000 metric tonnes.

Therefore by using reported World Gold Council / GFMS data plus some very conservative assumptions, we can approximately account for 62,000 metric tonnes of the world’s roughly 160,000 metric tonnes ever mined.

The very nature of World Gold Council / GFMS data may be characterized as being static and don’t tend to change much year-over-year. This demonstrates that the owners of gold bullion DO NOT GENERALLY TRADE THEIR PHYSICAL STASHES – they sit on them!

The Conundrum That “IS” the London Bullion Market Association [LBMA]

The LBMA is considered to be the world’s foremost physical gold market. Here is their data on the number of ounces of gold “transferred” DAILY – by month, year-over-year – from Nov. 08 – Nov. 09: There are 22 business days per month, so the LBMA claims to have traded 151,046 metric tonnes of gold in the most recent 12 month period.

The LBMA reports that they have “transferred” or traded 151,046 metric tonnes of gold – a commodity that when folks possess it, they are demonstrably inclined NOT TO trade it. Using another bench mark, annual global mine production is in the neighborhood of 2,500 metric tonnes. The LBMA claims to have sold last year’s global mine supply over 60 times in 12 months.

The LBMA claims to do this year-in, year-out.

London is but one exchange where gold trades. Others include N.Y., Tokyo, Dubai, Bombay and different points in China. Don’t forget, physical ounces traded on ANY of these exchanges are additional ounces that London cannot be trading.

The reality is that every physical ounce of gold reported to be in the vaults of the LBMA and exchanges in general, is sold tens and perhaps more than a hundred times over in paper form. This paper selling suppresses what would otherwise be the freemarket gold price.

The Russians are known to be very shrewd and calculating. It makes one wonder whether the Russian announcement of a sale of gold bullion – TO THEMSELVES – might not have been a “tell” signaling their intention to not only withhold physical metal from the market and ensure that paper promises of delivery of real metal are honored.

Could it be that the Russians are really signaling that the assignment of false, arbitrary values [using futures / derivatives] to finite resources will no longer be tolerated?

If so, the real leverage is in owning physical gold bullion – not the paper promises.