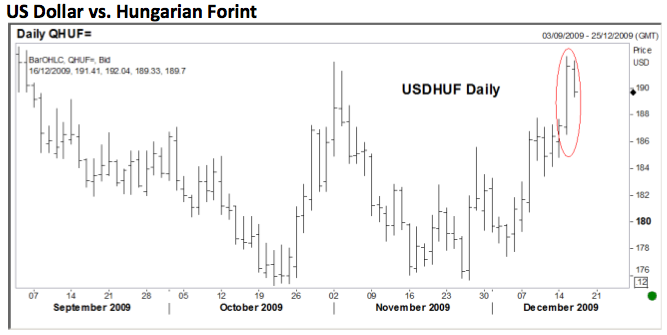 Quotable
“People such as George Soros and Michael Moore certainly talk a good game, but the next Mother Teresa they are not. Mother Teresa never criticized the free-market system; wealth just wasn’t for her. Soros and Moore are quite the opposite. They will never take a vow of poverty and dedicate themselves to helping the poor. They just want our civilization to take a vow of poverty and become poor.

This has caused many to wonder: How can someone preach socialism while being the most rapacious “capitalist” imaginable?”

Selwyn Duke, The Pathology of the Rich Socialist

So we’ve been harping on the rising concerns in Europe and what they may ultimately mean for the euro. But it’s clear that the worries are not confined to the EMU. Yesterday traders put a hurting on the Hungarian forint, the Polish zloty and the Czech koruna.