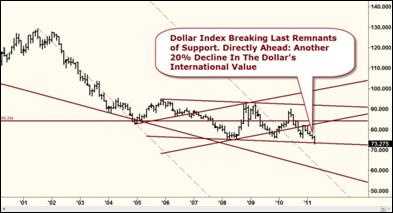 You now know, very clearly, what I’ve been warning you about since the great financial crisis began, with the busting of the real estate bubble.

Everything you are witnessing, from the wild gyrations in the markets, to the raging bull markets in gold, silver, oil and other commodities … to the rapidly eroding purchasing power of the dollar … and more …

Are all symptoms of a bankrupt nation!

The ratings agency Standard & Poor’s now knows this too. That’s why it downgraded its outlook on the U.S. Treasury market last week, signaling to the world that unless Washington gets serious about its spending and debts, the U.S. may lose its AAA credit rating.

To the extent the S&P warning gets Washington to %#@! or get off the pot and make some real changes, S&P’s warning is a good thing, no doubt.

But I’m afraid that whatever Washington does, it will be too little, too late. There is simply no way our country can make good on its approximately $136 trillion of IOUs.

And it’s time, if you haven’t already, to get very, very serious about protecting your wealth.

With all this in mind, I’m going to devote the rest of today’s column to the most recent questions I’ve received, and my replies.

A: The dollar does have some life to it. Not much, but it can show occasional strength, for two primary reasons in my opinion …

First, when investors are nervous in the very short term, they go into liquidation mode, taking risk off the table, selling off assets. The simple act of liquidating and going to cash can give the dollar a short-term boost.

Second, the euro is fraught with many of the same problems as the dollar, plus many other fatal problems that are unique to the euro. So savvy money at times may still prefer the dollar over the euro.

Nevertheless, the dollar remains in a very serious bear market. And mark my words, it will lose its world reserve currency status, officially, over the next few years.

There is simply no way the world can stay on a dollar standard when the country whose currency is playing the role of the world’s reserve currency is bankrupt.

Q: Larry, there’s a lot of talk these days about the Federal Reserve possibly reigning in the money printing, and perhaps even soon raising interest rates. What say you?

A: The Fed, at some point, is going to try to reverse course, stop or slow the money printing, and raise rates.

But neither action is likely to happen anytime soon. And even when the Fed does try to make some moves, it is going to quickly find out that it’s gotten itself into a real bind, a real Catch-22.

But in the end, what the Fed does or doesn’t do is irrelevant. The markets are far more powerful than any central bank and any government.

And the markets already know what neither the Federal Reserve nor our leaders in Washington want to admit: That the U.S. is bankrupt … that the U.S. government has failed our nation … and that it’s time to rewrite all the rules and effectively reboot the monetary system and the government.

Q: Looks like you’ve been right as rain on inflation, it sure is heating up. Any updates for us?

A: Yes, expect a lot more inflation! In almost everything.

Keep in mind this cycle chart, which I’ve previously published. The cycles for inflation point higher for at least SIX more years, into the year 2016 — REGARDLESS OF WHAT THE FEDERAL RESERVE DOES. Q: George Soros recently stated that for all intents and purposes, the dollar has already lost its reserve status. Do you agree?

A: Unofficially, it certainly has. Anyone who travels or does business in other parts of the world knows how serious the sentiment change is ― the dollar is no longer king of the hill, even in the streets.

It’s also why, as Mr. Soros noted, you’re witnessing the monetization of so many assets, which is simply another way of saying you’re seeing massive asset inflation.

Officially, the dollar will keep its reserve status for a few more years, until its lost so much value that there’s simply no alternative but for authorities to come together with a new Bretton Woods, so to speak, and rewrite the entire monetary system.

Q: How much more can the U.S. dollar drop?

A: Any fiat currency can theoretically drop to zero. History is cluttered with broken currencies that literally were not worth the paper they were printed on.

I think the dollar can lose at least another 50% of its value, if not more, before it loses its reserve status.

For reference purposes, we’re talking about the widely-watched U.S. Dollar Index plunging from its current value of about 75, to approximately the 37 level!

Q: There’s now a lot of talk about China finally allowing its currency to appreciate, something you forecast for this year. Do you think it will really happen?

A: Yes! First, despite four interest rate hikes and seven hikes in their banking reserve requirements over the last six months, Beijing has been unable to tame inflation.

Second, it won’t be able to contain inflation in its country as long as the Fed continues to print money, which it will.

Third, Beijing is running out of options to tame inflation, so now, it must start to let its currency appreciate. But that won’t be a problem for China, because, in essence, it will also give Washington what it wants, a lower dollar against the yuan.

No matter how I look at it, I see the dollar heading much lower long term, and the yuan, much higher.

Q: Gold and silver look very toppy at times, like they might end up pulling back sharply, just as you had previously forecast. At other times, they look like they’re going to go straight up. What should I do? I’m heavily invested in gold and silver, have made a lot of money on your core recommendations, but am very nervous about the markets!

A: There may still be the pullbacks I had warned about, especially in silver. However, per my recent columns, I do believe gold and silver are now past their most vulnerable cyclical periods. By vulnerable, I mean a period in which a sharp 20% to 30% pullback was likely.

So any pullbacks we see now should be shallow and short-lived. Most importantly for core gold and silver holdings in bullion, bullion ETFs, or mining shares — keep the long term in view: Precious metals and related investments are heading much, much higher over the next few years.

So as hard as it may be at times, for core precious metals holdings I recommend refraining from watching the markets on a daily basis and ignoring the daily moves. It helps keep you sane and objective!

Q: Many other editors I follow tell me that gold bullion ETFs could backfire someday and go belly up. You don’t seem to worry about that. Why?

A: No, I do not see that as a problem. Not now. It may become a problem once gold passes well north of the $2,300 level, its inflation-adjusted 1980 high. That’s when gold’s real bull market will begin to kick in.

But we’re not there yet, so I’m not worried about it, for either gold or silver ETFs. I will give plenty of advance warning when I do think it can become a risk.

Q: I’ve been tracking the recommendations you’ve made in your column since March 2009, when I subscribed. I acted on quite a few of them and have pretty large gains. Why don’t you give us more specific signals and recommendations to act on?

A: Yes, indeed, I’ve suggested quite a few recommendations in this column since its inception a couple of years ago, most notably for core long-term gold holding.

And yes, they are up substantially. However, keep in mind any recommendations I make in this column are of a general nature, meaning I do not give specific buy and sell prices. Those are reserved for subscribers to my Real Wealth Report and to my VIP trading services.

That being said, when I consider it extremely urgent, I will suggest specific ideas in this column, as I did recently when I recommended hedging positions.

So my best advice is …

A) Don’t miss a single one of my columns! Read them every week to make sure you’re fully up to date with my thinking. And, even better …

B) Take out a membership to my Real Wealth Report. It’s a mere $99 a year and you get every single recommendation I make, the instant I make it.