A Perfect Example of the Slope of Hope 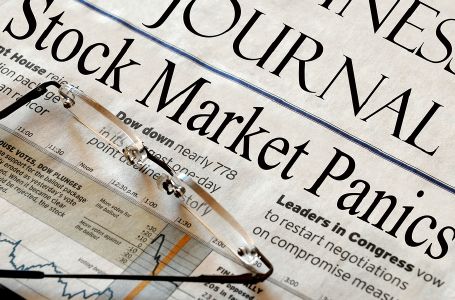 Almost everybody who follows financial markets has heard about climbing the “wall of worry”: the time when prices head up bullishly, but no one quite believes in the rally, so there’s more worry about a fall than a rise.

What’s the opposite condition in the market?

Bob Prechter named it the “slope of hope,” meaning that as prices head down, no one wants to believe the market really has turned bearish, so there’s more hope for a rise than fear of a fall.

Want to Know How to Prosper in a Deflationary Depression? If you haven’t yet given Robert Prechter’s deflation argument your full attention, you should know now that yesterday was the best time to do so. Download Prechter’s 60-Page Guide to Understanding Deflation here.

The market has been rising recently, following a bearish decline from late April through the end of June, which makes now the perfect time to learn more about the slope of hope.

According to polls, economists are virtually unanimous in the view that the “Great Recession” is over and a recovery is in progress, even though “full employment will take time,” etc. Yet mortgage writing has just plunged to a new low for the cycle (see Figure 1), and housing starts and permits just had their biggest percentage monthly drop since January 1991, which was at the end of a Primary-degree recession. But the latest “recession” supposedly ended a year ago. How can housing activity make new lows this far into a recovery? The answer is in the subtitle to Conquer the Crash, which includes the word depression. The subtleties in economic performance continue to suggest that it “was” not a “recession.” It is a depression, moving forward, in punctuated fashion, slowly but inexorably. Despite this outlook, keep in mind what The Elliott Wave Theorist said last month: “Even though the market is about to begin its greatest decline ever, the era of hope is not quite finished.” For as long as another year and a half, there will be rallies, fixes, hopes and reasons to believe in recovery. Our name for this phase of a bear market is the Slope of Hope. This portion of the decline lasts until the center of the wave, where investors stop estimating upside potential and start being concerned with downside potential. Economists in the aggregate will probably not recognize that a depression is in force until 2012 or perhaps beyond. That’s the year the 7.5-year cycle is due to roll over (see April 2010 issue). Stock prices should be much lower by then, but optimism will still dominate, and it will show up in the form of big rallies and repeated calls of a bottom.

Want to Know How to How to Deal with Deflation? Find out what Bob Prechter thinks about gold and what he suggests as the best antidote to deflation. The latest issue of The Elliott Wave Theorist brings you useful information for your personal financial situation. Details.

This article, Perfect Example of the Slope of Hope,was syndicated by Elliott Wave International. EWI is the world’s largest market forecasting firm. Its staff of full-time analysts lead by Chartered Market Technician Robert Prechter provides 24-hour-a-day market analysis to institutional and private investors around the world.