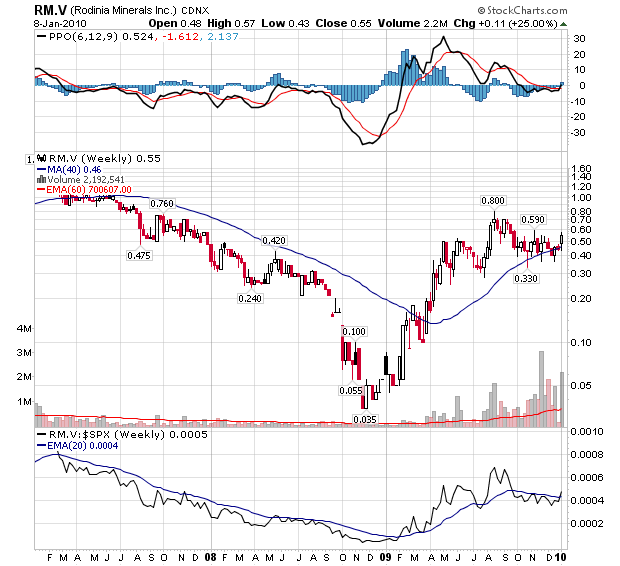 Even with the looming problems discussed above, I still like discovery opportunities because they are inherently cheap. I have become active in the lithium market.  I have reduced a position in Western Lithium (WLC TSXV) after a significant run-up in WLC shares last week.

…..read more of Michael’s report on Solares HERE as well as his commentary on unemployment and the markets

As noted in my initial commentary, one of the key reasons I am especially high on Rodinia Minerals is the smart strategy by which management is building the business.  Rodinia’s management team believes the lithium bonanza is only beginning as the forecasted demand for lithium far outweighs the known availability of supply.  As lithium-ion batteries become increasingly important in the automobile industry’s plans to reduce the use of fossil fuels, the green-car revolution could make lithium one of the planet’s most strategic commodities.  Rodinia, and its focus on becoming a low-cost lithium producer in the near-term, appears well positioned to deliver into this supply-demand gap.

In my view, the risk/reward pendulum has swung a little more in Rodinia’s favor after two important announcements at the end of last week validated management’s lithium demand believes:

GM Builds First Lithium-ion Battery for Chevrolet Volt (Thursday)
Obama Announces $2.3 Billion in Clean Energy Tax Credits (Friday) in Follow-Up to $2.4 Billion in Grants for Batteries and Electric Cars
Currently, there exists only one producing lithium operation in North America and it is encompassed by Rodinia’s flagship Clayton Valley Project in Nevada.  These announcements appear to only begin to define the demand for lithium in the United States but they go a long way towards possibly positioning Rodinia as the supplier of choice for made in America batteries and electric cars!

On January 7, 2007, GM launched the Chevrolet Volt electric car concept. Since that time, the focal point of its advancement has been the development of a long-lasting, quick-charging lithium-ion battery.  Exactly 3 years from its debut, GM successfully manufactured the first advanced lithium-ion battery for a mass-marketed electric vehicle at its Brownstown Battery Pack Assembly Plant.

“The development of electric vehicles like the Chevy Volt is creating entire new sectors in the auto industry – an ‘ecosystem’ of battery developers and recyclers, builders of home and commercial charging stations, electric motor suppliers and much more,” said GM Chairman and CEO Ed Whitacre.  “These companies and universities are creating new jobs in Michigan and across the U.S. – green jobs – and they’re doing it by developing new technology, establishing new manufacturing capability, and strengthening America’s long-term competitiveness”, he went on to say.

In order for the Volt to reshape the automobile industry and become a prominent fixture on our streets, GM will need a reliable, low-cost source of lithium to build the lithium-ion battery.  Rodinia’s Clayton Valley can represent an ideal American solution for procuring this key ingredient.

48 Different Projects Will Share the Loot from Obama’s $2.4 Billion in Grants for Batteries and Electric Cars

President Obama recently announced the allocation of $2.4 billion dollars from the Recovery Act to be divided up amongst 48 different battery and electric vehicle projects.  “With these investments, we’re planting the seeds of progress for our country and good-paying, private-sector jobs for the American people,” he said.  The majority of grant winners are familiar names, with Detroit firms obtaining a substantial share.

The money is going to three main categories of projects:

1 – $1.5 billion to US-based manufacturers for production of batteries and their components

3 – $400 million in grants to purchase plug-in hybrid and all-electric vehicles to test demonstrations in several locations.

It is becoming quite clear that we are going to push forward with great might to make the era of the electric car a reality.  While 48 different projects have been awarded funding, the bulk of the money, and the near-term success of the initiative, seems to revolve around the lithium-ion battery.

The electric car era is still very much in its infancy, but it is undoubtedly coming.  GM appears to be staking its future on it, and President Obama has opened up the coffers for $2.4 billion to see it happen.

The development of renewable/alternative power sources is also becoming a reality.  As this occurs, we will need batteries to assist in the storage of alternative power generated during peak production time.

Lithium-ion batteries appear to be the leading battery technology. They also represent the single largest limiting factor in the development of electric cars and alternative energy storage. In order for these initiatives to succeed, I believe we need lithium to build batteries.

Rodinia Minerals is a potential source of low-cost lithium ideally situated to serve the U.S. market from its flagship asset in Nevada.