“The Smartest thing said about Silver in a long time”

Posted by Steve Sjuggerud via The Bullion Vault 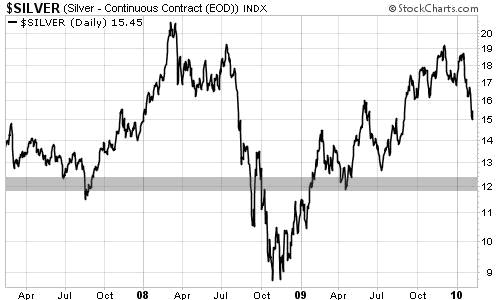 IT WAS THE SMARTEST thing said on silver that I’ve heard in a long time, writes Brian Hunt, editor in chief of Steve Sjuggerud’s DailyWealth email.

Not surprisingly, Chris Weber said it. He’s as close to an investment oracle as you’ll ever find.

For 39 years, since age 16, Chris has made his living as an investor. To live this sort of life, you have to be a contrarian…you have to be willing to think and do unpopular things. Chris did just that when he told readers of his Global Opportunities Report:

“If the Chinese economy falters, then it is very possible that commodities will fall as well, since China has been a huge market for them.

“I think gold will do better than silver under this scenario, because gold is viewed as a monetary commodity by all the major players, whereas silver is viewed as an industrial metal as well as a monetary one. In a contracting economy, silver may fall. That doesn’t mean I’m going to rush to sell my silver, it means that I am prepared to see silver fall…”

This sort of thing drives some people who hold gold and silver nuts.

There’s a reason gold has been used as money for thousands of years, but it’s easy to get attached to. And many gold and silver owners are very emotionally attached to their gold and silver holdings…much more so than, say, someone who owns 100 shares of Microsoft.

Telling them Gold Bullion or silver could decline in price is like saying their children are ugly.

Chris, like me, believes the price of silver is going to be higher years from now. Governments are in a long-term trend of debasing their currencies, which will send the price of “real assets” like silver much higher. But despite Chris’ bullishness, he doesn’t stick his head in the sand and ignore things that might differ from his thesis.

After all, even the strongest bull markets can trend sideways, or lower, for many months…even years. And a weakening of the global economy could hurt silver because it’s heavily used in industry.

For a picture of how “hurt” silver could get in a correction – and where I expect will be a spectacular buy point – take a look at this three-year chart of silver: Note that if you take out the crazy price action produced by the late 2008 credit crisis, you’ll see that buyers tend to support silver when it trades for $11 to $12 per ounce.

I believe this is the price where smart, rich investors step in to buy millions of Dollars worth of silver for their “crisis portfolios.” I know several extremely wealthy investors who have this area pegged as a place to buy lots of silver. They see it as the bargain price.

They know a global debasement of currencies will eventually push gold and silver higher…which will overwhelm any short-term considerations. And $12 silver is a cheap way to hedge the rest of your portfolio against currency crisis.

I’m sure Chris’ comments generated some negative feedback from hard-core gold and silver fans. I’m sure this essay will generate some, too. But as investors, we always have to consider the potential risks to our holdings, rather than blindly focusing on the potential rewards. You have to be prepared to see your silver holdings decline in value.

And while I’m bullish on silver, I agree with Chris. If the magical economic recovery the US and Chinese governments have engineered doesn’t pan out, it could temporarily depress the price of silver…even down to $11 an ounce. And as you can see, this would present a terrific buying opportunity for silver bullion and silver stocks.

How best to Buy Gold and silver in 2010…? Cut out the middleman, slashing your costs – and your risks – by using BullionVault…