“The MOTHER of all Secular Bull Markets” 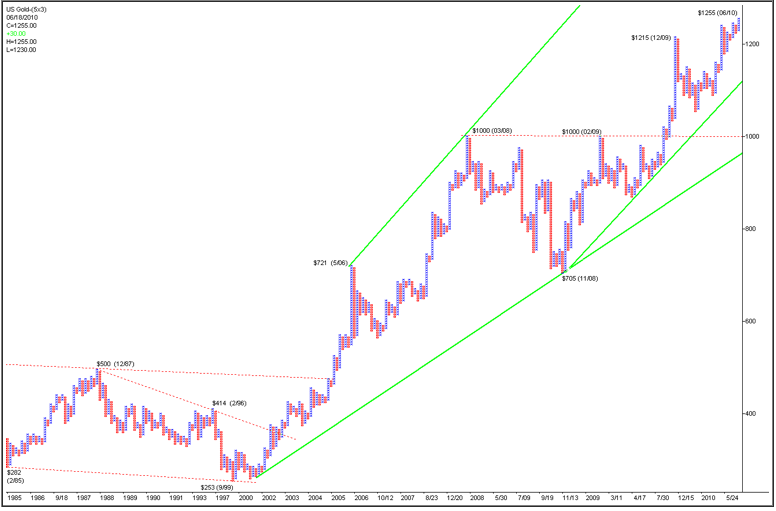 It’s been my opinion that gold has been in the “mother” of all secular bull markets and before it’s all said and done, it can have a 2 handle in its price ($2,000+).

While we have had in the past (and can expect more in the future) some short buy sharp corrections, I continue to remain firmly in the bullish camp for three key factors:

The biggest single holders of gold, Central Banks, have gone from major net sellers to either net neutral or net buyers.

Gold producers, who IMHO once cut off their noses to spite their faces by selling forward large quantities of future production, have come to realize hedging is a “four letter word” among their shareholders and potential investors.

Gold has rightfully taken its place as the only real currency by rising and setting records in most major currencies (this feat was not to be if one had listened to one of the most notorious gold perma-bears).

There are numerous other bullish factors including growing geopolitical concerns worldwide, but in my opinion, the above three are the driving forces. Until such time one or more of these factors change, I don’t see any major top possible.

Silver, the poor man’s gold, should mainly play second fiddle to gold, but nevertheless should more than just tag along for the ride. I have for quite some time suggested being seriously over weighted in precious metals over base metals, but metals overall continue to be the primary place I suggest one look for long-term capital gains.

Yes, the easy money has been made but the fat lady hasn’t even gotten in the limo yet, let alone arrived in the building and is ready to sing.

Peter Grandich is the founder of Grandich.com and Grandich Publications, LLC, and is editor of The Grandich Letter which was first published in 1984. On his internationally followed blog he comments daily about the world’s economies and financial markets and posts his views on social and political topics. The result is an insightful and intuitive look at business, finances and the world, set in a vernacular that just about anyone can understand.