Posted by Donald Coxe via Zerohedge 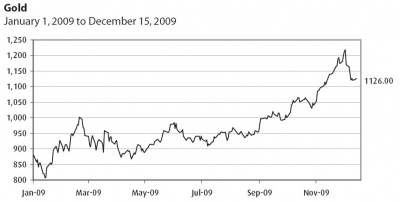 ZeroHedge – Even though we presented Don Coxe’s report in full earlier, we wanted to recapitulate his thoughts on gold, as we believe they deserve a post of their own. With gold having become, as we expected more than half a year ago, the most discussed and volatile asset class to accompany the latest Fed inflated bubble, Coxe’s view is a welcome addition to other such notable perspectives from the likes of Jim Grant, David Rosenberg, Dylan Grice, Goldman Sachs and many others.

As the only major financial asset that never pays interest or dividends, gold’s performance could be the clearest, purest example of Zero-Based Investing: With a 25% rise this year, Gold has beaten the S&P roughly 7%. As measured by the XAU, gold mining stocks’ total return is 35%.

But gold’s investment return was exceeded by the amount of publicity and debate it generated. Its late-year blow-off past $1200 briefly made it a Page One story—thereby automatically guaranteeing a sharp correction.

The media were filled with authoritative explanations:

Clients can undoubtedly add other justifications and explanations to their lists.

We were in Toronto the week gold prices were setting records daily, and were asked—on TV—to explain the dramatic run-up. Various prominent commentators were falling all over themselves to issue ever-higher targets for bullion prices.

We admitted that we couldn’t explain the sudden rush and the dramatic daily leaps. When asked for our price target, we suggested….

“As an historian, I seek some historic data to assist our predicting. When gold broke through $1,000, we began considering appropriate targets. As every English schoolboy knows, 1066 was the Norman Conquest—the first gold target. The next important date was Magna Carta—1215—and gold has now managed to attain that level. The next big date is the Provisions of Oxford 1258 [when Simon de Montfort forced important constitutional changes on Henry III].

“My one-year target for gold is 1345—the onset of the Black Death.

“Apart from that, I really can’t say how high gold could ultimately go, although longer-term it should reach 1485, when Richard III fell in the Battle of Bosworth, launching the Tudor monarchy, and giving us the enduring quote, “My Kingdom for a horse!” The interviewers laughed, and changed the topic.

Next day, Goldman issued its authoritative target price for next year: 1350.

We were called for comment, and graciously accepted that prediction because it was the end of the Black Death.

The point of these musings is that no one really has any idea of the longer term price of gold that can be justified by sober analysis.

All that we can sensibly say is that gold’s price entered a 20-year Triple Waterfall collapse in 1980, falling from $825 to $250, and has risen every year in this decade. If it can maintain its strength at a time jewelry demand is shrinking, then investors and speculators are in charge; their motivations include momentum and malaise: Gold looks good because it keeps going up, and they’re scared about what the Fed and Obama and other central banks and governments are doing, and have no great confidence that there will be a sustained, noninflationary economic recovery, so gold is a good place to hide.

Gold has been the best-performing major commodity since the financial crisis began: We see no big reason why that outperformance should be over. After its breathless run to $1220, it’s entitled to correct back toward $1,000—or even a bit below that chiliastic level—without ending its bull market.

Finally, gold may even be decoupling from the dollar. The sheer scale of foreign exchange reserves in China, Hong Kong, India and other countries whose currencies are pegged, directly or otherwise, to the dollar may be opening a whole new demand for gold. Just to maintain even tiny percentage exposure to gold in forex reserves means these nations must remain on the buy side. The euro was once seen as a worthwhile alternative to the dollar in Asian forex accounts, but the unfolding problems of its Eastern European and Mediterranean members are exposing the euro’s internal contradictions as a viable alternative to the dollar.

In a world in which nearly all paper money has problems, and in which the sheer supply of paper money is expanding far faster than global GDP, gold has its best claim as a constituent of foreign exchange reserves since Bretton Woods booted it out sixty-five years ago. [emphasis ZeroHedge]