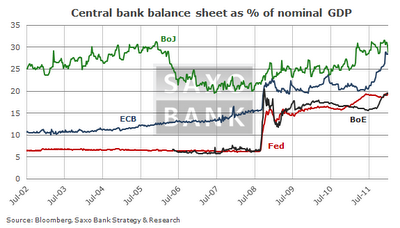 Steen Jakobsen, chief economist for Saxo Bank in Denmark has some interesting thoughts to share on gold and metals in an email update that just came in.

Interesting session with Fed yesterday! Both the ECB and the FED have now clearly showed that the changed board of directors is far more willing to print money and keep rates low forever than ever before in a central banking history – which is probably not a good thing or is it?
It’s a wait and see game now – the FOMC action left plenty on the table for both the bulls and the bears. For the bulls this is ‘easy money’ for longer and low rates will have to work.
For the bears it’s sign of incoming depression when Fed feels obliged to signal low rates for longer.
The truth is probably somewhere in between. There is reason for low rates, but also printing money to the extent the major central bank does it makes all of us speculators chasing, again, investments which we would not normally engage in as commodities, metals, housing et al. We are effectively all being forced to take more risk for same return with low interest now predicted into the financial “forever”.
Sometimes the best analysis on an issue, and in my case almost always, comes from someone else – with reference to the FOMC I personally really enjoyed Caroline Baum’s piece:‘Fool in the shower’ to Give Fed a Good Scalding
Not only a gifted journalist and writer but excellent arguments and stories. Please do read her take on Fed’s difficult balance.
Today’s market open carry plenty of positive momentum, however Greek PSI and Portugal could ruin the party short-term.
Medium-term all things positive seems to have been priced in:
My good colleague Peter Garnry kindly provided me with this chart (which is now part of Stress Indicators) on key central bank’ balance sheet in percentage of their countries GDP. Simple stuff, scary stuff: Note how Europe or rather ECB in the space of six month have done more expansion than the FED has done in three years in terms of printing money(relative to GDP) – again – buy some paper producers! The world could run out of paper to print those debasing currencies on pretty soon!
Now is the time where you need your metals – particularly gold and gold stocks. The above issues shows you clearly and forcefully that we have moved from a ‘Maximum Intervention’ period into a ‘Maximum printing’ phase – this will give the policy makers a false sense of “improvement” and hope for a turning point not dissimilar to the comments seen exactly one year ago in Davos –

This new hope will stop the move towards the “Endung” – as the ultimate solution remains the same: Germany needs to decide for or against Europe – end of story – they will cave in last day, last minute but only if forced to do so, this more of same pretend-and-extend will delay this from Q1 to Q2 or Q3 meanwhile the balances or rather imbalances inside the system will increase making the ultimate price(loss) yet higher – but why bother with something which is more than one week away? As someone commented today by this time next year most of today’s politicians could be out of office anyway: China, France, Italy, Greece etc…

The story is always the same: Politicians spend money – the private economy tries to keep up. Meanwhile the challenge for us skeptics is best defined by Keynes old comment: ‘The market can stay irrational longer than I can stay solvent’ – and that is the bet Princess Merko-cy is playing when she kissed the frog and got an Italian prince with a huge balance sheet in Frankfurt. A true fairytale it is!

Mike “Mish” Shedlock says: As pertains to metals and Baum I agree. Here is my favorite line from “Fool in the Shower”.

Two policy makers — no names were attached to the forecasts — expect the funds rate to first begin rising in 2016. (My money is on New York Fed President Bill Dudley and Governor Janet Yellen.) That would mean eight years of 0 percent interest rates. There will be a revolution in this country before then if the economy is lousy enough to warrant 0 percent interest rates for that long. Even the fool in the shower knows that.